New Aliens on the Horizon From Ambush Alley/GZG (UPDATED)

Attention Dropship Horizon passengers. If you would be so kind as to look to the pictures below, you will see a strange and new alien race on its way out from the partnership between Ambush Alley Games and Ground Zero Games.

Appearing the forthcoming Tomorrow's War supplement from AAG titled, "Dagger and Claw" these creatures are the Darghaur and one of many races planned. These minis look like they will be another fine addition to the growing number of aliens available for 15mm science fiction.

Here is what Jon had to say about them..

An exclusive first look at the 15mm Darghaur for Tomorrow's War! This alien race will feature heavily in the forthcoming TW supplement, Dagger and Claw. I won't pre-empt the book by going into great detail, suffice to say that these guys are going to give the human forces on Glory a lot of hassle. They are tough critters with their turtle-like carapaces, favouring large-calibre projectile weaponry.

We'll be selling them in packs of ten figures (including separate heads, with a few spares for customising!) which makes up the basic "squad" organisation of the Darg forces. The Dargs have no visible sensory organs, communicating with each other telepathically - their horned "antler" racks denote their rank, with the lowest troopers having their horns cut down to stumps while team, squad and higher leaders sport progressively larger displays.

The first of the Darg figures are now ready for production, and will be up on our (GZG) webstore very soon - www.gzg.com - please also keep an eye on ambushalleygames.com for information about the rules supplement!
................

While they are not released yet, I'll make sure to post again when they hit dirtside. 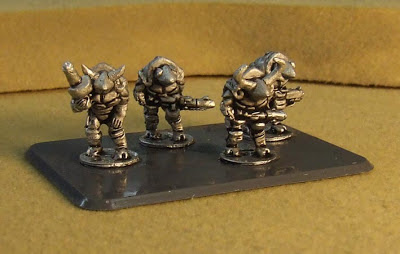 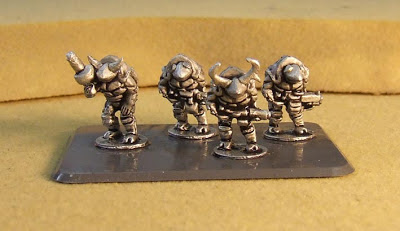 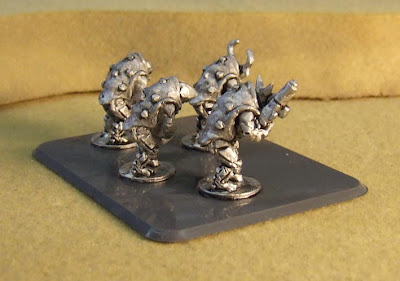 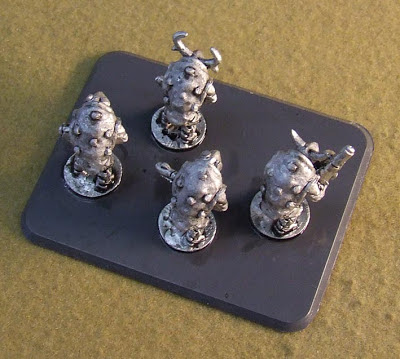