I like the chunky look of these new figures - they're almost a cross between GZG NAC Power Armor and those cool armored robots on the Fox network during football games. Critical Mass also expanded the Mercenaries armored vehicles, adding the Warmonger tank, Vanquisher self-propelled artillery, and Hellfire AA tanks.

All three vehicles are available in Tracked (very useful for near-future games or low-tech factions) and Grav (advanced races/settings) variants.

The Oddzial Osmy New Vistula Legion, one of 15mm SF's most popular human factions, has been augmented by Long Range Recon Patrol pack. The LRRP team carries a good assortment of weapons and equipment, including a recon drone and large rucksacks for long-haul missions.

The LRRP pack is now available in the UK from Fighting 15s and in the US from Picoarmor.

Khurasan Miniatures has released the XM-6 Heavy Grav Tank for the Federal Army. Jon wrote up some nicely detailed background fluff for the XM-6 on his blog - definitely worth a read if you're a fan of his Federation Forward universe. 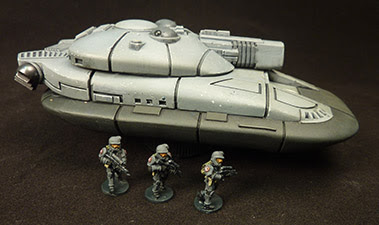 It's a big tank - 125mm long. This would make for a worthy opponent to the Topgun Marketing tanks (it even shares the orbital-deployment concept), and definitely has uses in settings like Traveller and Hammer's Slammers. It's also big enough to fit comfortably in a 20mm Sci Fi army, and could even be a light tank in 25mm/28mm games.
Posted by Chris K. at Friday, October 26, 2012