A Red Planet board 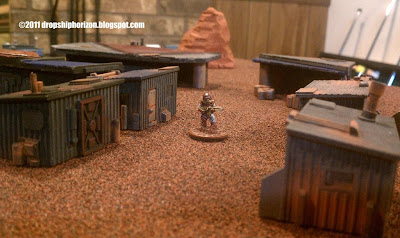 Ever since I switched to 15mm, I've been fighting battles over the same collection of desert terrain. I needed a change! Inspired by Mark's previous post and Martin's gallery, I decided to try a "red planet" terrain set of my own. This project was simple and quite inexpensive - and only took a weekend to complete. While the steps here were specific for my red planet, you could easily apply different colors and flocking methods to make any type of terrain you like.
First I needed material for the project. I wanted to start small - 24" x 24" is fine for skirmishes, or small battles with a couple squads and a vehicle or two. So I picked up a piece of 5/8" sanded plywood cut to that size. And to make the red planet I chose two colors of $1 craft paint (a base and a highlight) and two bags of Woodland Scenics flock (their fine scale works well as 15mm ground

A little experimenting with the flock led me to a blend of two parts red ore to one part black cinder. This is actually a pretty dark blend... not a true Mars but definitely something out of this world. 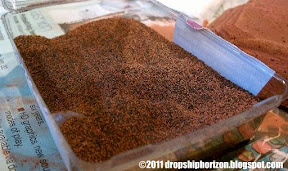 As with my previous desert and snow tables, I started with a test hill. I have a pile of assorted styrofoam packing sheets from furniture boxes... enough so I could cover a 24x24 table and not have to buy anything extra. So I sat down with the ol' Wonder Cutter and went to work. The first hill was simple, textured, and looked like it would work. 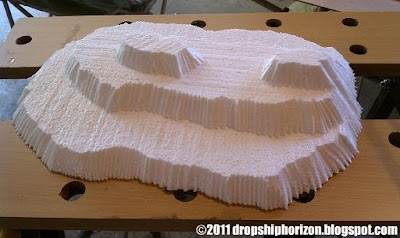 So I painted it. Two coats of the darker red covered it completely, and a quick drybrush with the orange brought out the carved texture. Then I brushed a 50/50 white glue/water mix and sprinkled on the flock. When flocking I let it dry for about an hour then gently go back over the whole area with the 50/50 mix. If you dab it on just right it will look like the flock is covered with milk, but not floating around. This dries to a nice solid finish that doesn't flake. Here is the result, with a GZG shanty and a Kremlin Cyberian Commando for comparison 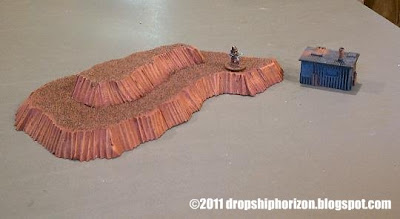 The results were okay, but still a bit unsatisfying. I sat down to work on some taller spires, like these at TerraGenesis. When working on these I realized that the texture on my earlier hill was perpendicular to normal erosion! So I turned the ol' Wonder Cutter sideways and produced these: 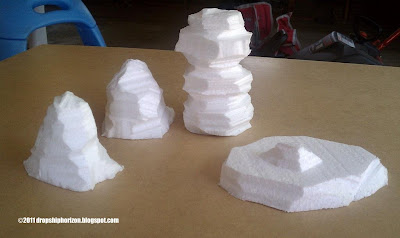 I thought these were a major improvements over my first hill, and I was eager to finish them. Same formula as before... two coats of the darker red and a quick and easy drybrush with the orange. 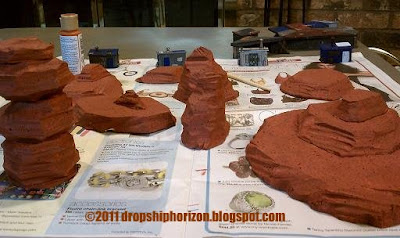 My camera didn't catch the contrast, but the orange drybrushing does stand out well from the red. I may still go back over them with a black wash to add a bit more depth, but I'm pretty satisfied with the results. 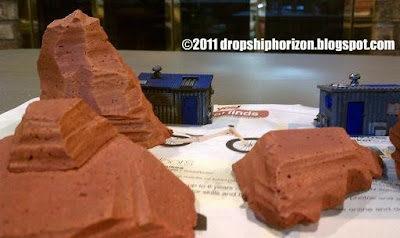 In between coats of the hills I finished the table itself. I did use a primer on the plywood before I started painting - this helps to seal the plywood and prevents your first coat of paint from soaking in. I didn't use any drybrushing on the table - just painted it red, flocked, and sealed. I applied the sealant with a dollar-store spray bottle rather than a brush, and gave it two extra coats. Right now it's solid enough that I could reverse it and make a two-sided board. The table took longer to make just because of the extra coats of glue needing to dry, but was still a very simple process. If you want to do this project at home, I'd say paint and flock the table first, then add the sealant coats while you work on hills, spires, crags, or whatever else you're including. 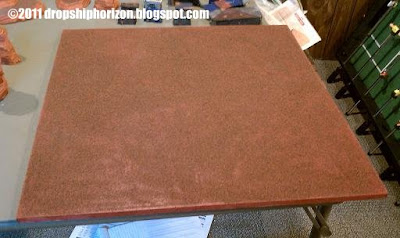 All that remained was to flock and seal the rest of the hills. Since the hills would need to dry overnight I had to leave them aside... but the test hill and the spires were ready now! I set out the table, deployed a quick mining settlement (combination of GZG shanties and BWS Startown Slums), scattered the finished terrain bits, and had a battlefield ready to play a quick game of FUBAR! 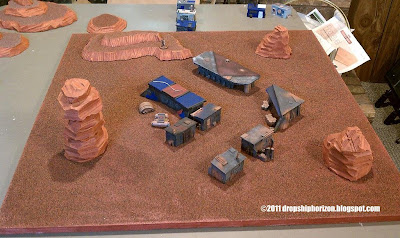 So... who wants to see the report from that battle?