If you remember, I made a post about Weird World War Two just a week or so back. I subsequently placed my first order with Maelstrom Games which arrived in double-quick time the same week.

I have to say that if Battlefront's Soviet Roto Razvedki Universal Carriers (with crew) lived up to expectations then Soviet Leytenant A V Pyl’cyn and Submachine-Gun Company surpassed them. Excellent miniatures sculpted by Evan Allen, they are closer to the original Battlefront figures than those blocky ones which have appeared in recent years. With this Submachine-Gun company you feel that you are getting a whole army, there are so many figures. There's something very satisfying about opening a blister with 40 or so miniatures which make up a complete unit rather than a ziplock bag of 8-10 figures. 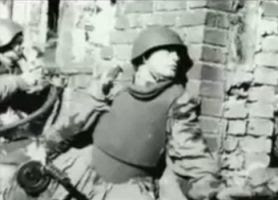 Anyhoo....for ages I have hankered for decent Soviet WW2 assault engineer-sappers in camo suits and body armour. I think mostly because there's just something vaguely retro Neo-Soviet Sci Fi or even alternative history about them. They are the sort of soldiers I'd expect to see in a latter day interpretation of Shakespeare. More Ian Mckellan in Richard III (1995) than Kenneth Branagh lovey-lovey.

Not only can I use these as Late WW2 Soviets, but this retro Ne0-Soviet look encourages me to use them both as Zombie-Nazi hunters and also some kind of cheap but plentiful Low-Medium Tech Sci Fi urban combat force, inspiration coming from the photo above.

Well, the good news this week is that Battlefront announced Soviet Engineer-Sappers as upcoming releases on 16th May! Huzzah! 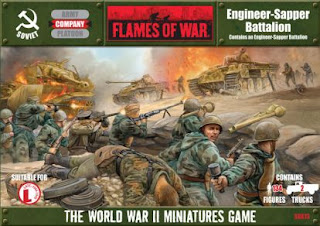 Looking at the photos on the website it appears that Battlefront have pulled off another classic flanker on the other 15mm WW2 manufacturers! Now don't get me wrong, when Battlefront releases something bad it is usually very, very bad. But when good, it's generally GREAT! And SBX13 looks like one of Evan's greats! 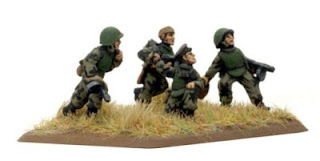 Like the Master Chef, I used to turn to Peter Pig to come out with figures that had this sort of uniqueness and character and I'm sure the WW2 wargame fraternity would have hailed the Battlefront Soviet Roto Razvedki Universal Carriers as a stroke of genius if issued by Peter Pig. However, like them or loathe them, in my opinion Battlefront have been at the forefront of turning out some fresh and interesting WW2 miniatures in recent years.

The Soviet Engineer-Sappers Battalion boxed set has 134 figures with loads of decent poses/weapon types including Panzerfausts and plenty of characters, especially amongst the NCOs and officers. The boxed set also includes two generic 1930-40's trucks - useful for Pulp games. You can see from the photo above that the Soviet Engineer-Sappers in body armour and camo suits just look out of the WW2 norm and are well worth being considered for use in a different context, be it Weird WW2, alternate history or Sci Fi.