.
Coming next from Khurasan to reinforce the Garn legions are Garn Champions! - Scaly Terminators, the Arnold Garnineggers of the reptilian world! 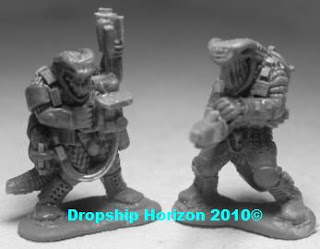 Get to da Dropship!
The largest, bravest and strongest Garn are trusted with the heaviest weaponry--huge particle beam weapons and superheavy flanethrowers that can incinerate a typical colony prefab in one fiery gout. similar to the heroes of old Norse mythology, they glory in war and slaughter; and are free to join Garn expeditions as they please, being free to go where the battle will be fiercest.

Jon has commissioned Two poses of mega-Garn, considerably taller and more massive than the others, armed with equally large heavy weapons. These were made to supplement the normal squad heavy weapon borne by a warrior in the command pack. Tomorrow's War gamers will benefit from the exra heavy firepower the Garn Champions bring to the table.

The Champions unfortunately missed the current casting cycle, that's happening right now, so no firm ETA, but they're made and coming!

Just the thing for those who want Garn BFGs and want them to look like Garn ... because I guess when it comes to the Garn, there are no substitutes!