I recently received a communication from Roger Dixon, a member of the South London Warlords gaming club, who thought that Dropship readers might like to see what the Warlords had been doing in 15mm scifi of late. Take a look at the information he provided as well as the massive eye candy. 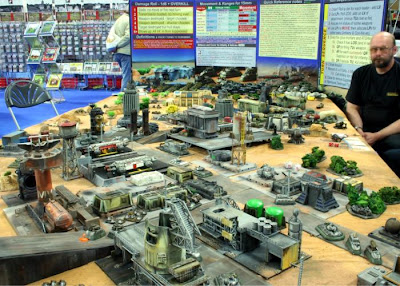 "If viewers are really interested in the Hammer's Slammers game(s) we put on at Sheffield Triples this year, here are a few facts about the game.
"All the players have been keen 15mm Sci-fi gamers for a long time, having tried different rule sets out over the years, and most of us have amassed a large collection of 15mm miniatures. Hammer's Slammers has proven very popular with our group. It plays very well and, with a couple of detachments per side, we can get a game finished in a 'club evening's' play. All the games played at this convention were in 15mm but the Hammer's game works in 28mm, 15mm, and 6mm. The 'tank park' at the end of the table shows most of the 14 different mercenary detachments we tried to use over the two days of the convention, as well as some of the 25mm versions of the tanks.
"The gameboard was built and displayed by members of The South London Warlords, and presented at Triples in Sheffield UK over two days. Measuring 10' x 6', the table was covered with a base cloth (same both days) made from old cotton curtains painted with emulsion from the local DIY store and highlighted with cheap 'match pots'. Texture was added by mixing builders' sand and 'bird grit' into the base coat. 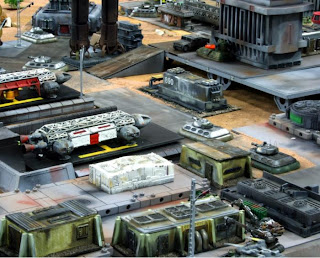 "For this convention, we had two different scenary set-ups, one for each day of the show. The set-ups were a drilling rig/shanty town on a barren planet on the first day, and a large Space Port, which covered most of the table, on the 2nd day. "Most of the large buildings were scratch built from toys and old models. There is a matchbox toy garage in there somewhere, some old Revel 'Saturn 5' launch pads, two 'Robot Wars' play sets, some railway model items, and endless pieces stolen from my son's toy box! Other buildings include some Critical Mass items, and some old GZG bits. "The Building 'base plates' are made from my new 'wonder material' 'Flexi foam', which comes in large sheets and can be cut, scored, bent and painted. The shantytown is mostly GZG, with other buildings, including a scratch built wind farm, added. "The roads come from S9 engineering (28mm scale road system), while the craters come from GW. Another club member made the water features. All the scenery took about 6 months to build and complete. 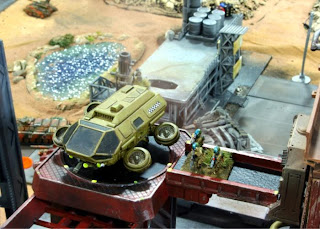 "All the 'plants' are fish tank plants, cut from their sprues, mounted on bases, and based with sand/PVA. The 'jungle trees' are the old GW ones ... perhaps the most fiddly things to build and paint!
"The vehicles and space ships are a large 28mm scale GZG resin dropship, four Dinky Space 1999 'Eagles' salvaged from jumble sales, boot fairs etc., and various Matchbox cars and trucks. "The miniatures (mostly from Old Crow) are excellent, and both the rules and miniatures really reflect the David Drake Hammer's Slammers books and background. 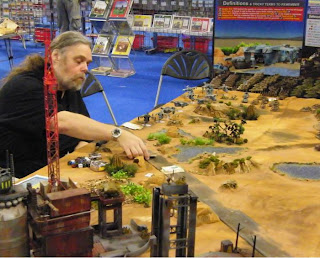 "Hammer's Slammers is definitely on the 'hard' side of Sci-fi ... the game plays fast and deadly, and rewards good tactics and leadership. Although, to some people, the background may seem a little 'limited', (there's only one alien race for example), the mercenary companies, around which the books are written, provide lots of scope and variation in game play."
Additional details of the Warlords' miniatures, battles and scenery as well as further info on the Hammer's Slammers miniatures game can be found at the following links -
http://www.salute.co.uk/mainframe.htm
http://slwarlords.blogspot.com/
http://www.hammers-slammers.com/home.htm