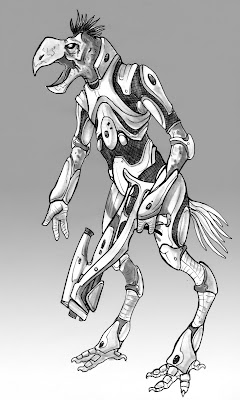 Steve over at Mad Robot Miniatures has taken the dive into 15mm science fiction with the announcement of a new project featuring bird-like aliens. The Harook appear to be the byproduct of recent discussions on the gaps in the alien catalog in the hobby, making use of visual references supplied by various posters in discussions on TMP.
So far there has only been a finished concept drawing released but Steve was kind enough to provide some of the development sketches as well. By the looks of them, the Harook fit the bill (no pun intended) for the avian alien quite well. The design is humanoid enough to make them easily accessible to players but not so much so that they fall into the rubber suit category of aliens. The styling of the armor and weapons is alien enough to help with detaching them from the space humans that will surround them.
Their initial release plan is for a pack of 10 unique poses, to be sculpted by the talented Pedro Navaro. the initial release will include a leader type as one of the 10. Future plans include a quick follow up with command, heavy weapons and even some assault troops. A dropship is also in the plans, allowing the Harook the potential for being a force full of options.
I look forward to their release and cannot wait to see some of the greens. Steve has expressed an interest in keeping us in the loop on developments and I'm sure he'll be tracking their development over at Mad Robot's blog.

Exciting news! Check it out!