As we mentioned earlier the latest releases from Ground Zero Games are now available for order. Jon sent me a few samples for review and here are my thoughts. 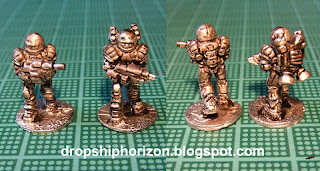 First off we have the NAC Power Armour. I know a lot of people have been waiting for resculpts of the different GZG power armour troopers and the NAC are the first ones out. They come six to a pack with two different poses and weapons (grenade launcher and rifle) and are supplied with optional jet/backpacks. What first sprang to mind when I saw them was "Gort!", followed by "Traveller!". They have a kind of retro hardsuit look that really appeals to me! The detailing is good and I like the stubby guns as well as the fact that the jetpack is optional (although I prefer it on). Only two poses is a bit disappointing though and to make matters worse the two poses that we get are very similar. I'm hoping that we might see some further addition to this line later on, providing us with more diverse weapons and poses. Also, it bears mentioning that if you're after some really bulky Heinlein-esque power armour you might want to look elsewhere as they are relatively skinny. Personally, as I have something different in mind for my UNSC, I will use them as player markers for 3:16 - Carnage Amongst the Stars.

With all this human power armour goodness we need something alien to balance it out, and hey if it isn't Crusty heavy infantry! Again six to a pack but three different poses this time and all carrying the same heavy arc rifle. Also included are optional backpacks. These guys I'm sure will be a welcome addition to many of the Crusty forces out there as they supply some added punch. They seem to be wearing some kind of hard/power suit with large, bulky helmets. Actually the helmet design have a slight look of dog or pig to them so I could see them being used as some kind of uplift aliens as well. The detailing is good and I like the more varied poses in this pack. I've always liked the alienness of the Crusties and the design of the armour (the helmet in particular) helps reinforce this. They will most likely form the tough core in my Crusty force (that's made up of riff-raff mostly). 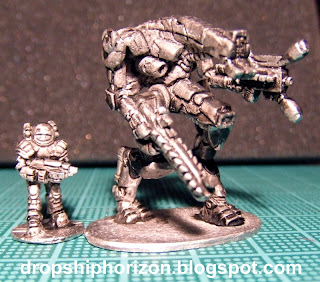 And of course the new Crusty combat walker! I think this is the model most people were expecting when Jon first mentioned the Crusty mecha. At twice the size of a man it has the right size and, again, it simply looks very alien. There are two models in the pack with six arms and two different sets of legs. There are four weapon arms and two with no weapons so you will be able to get a few packs of these and still have a lot of variety in your models. 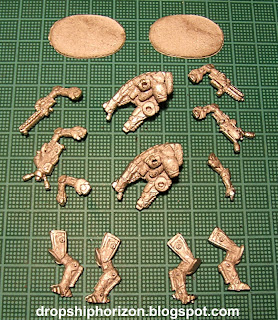 It's a well detailed kit and I kept discovering little details as I looked it over, like what looks like thrusters at the back of the body. The weapons look great, I especially like the gravity gun(?). I think I will drill some holes in my walkers to add some more fine detail to it like spines and antennas.

The only complaint I have is the connection points between the limbs and the body that are very loose and jingly. While it is a fairly trivial matter I still like it when my models click together just right. Once it's assembled though it looks great on the tabletop and I look forward to seeing this guy duking it out with my Khurasan DIMOG's and Micro Panzer WarBots!


All in all a solid set of releases. I only hope we get to see more of those NAC power armoured troopers in the future!