In my Christmas War setting, I envisioned the Cimmerians to have access to lower technology levels (but more soldiers) than their Laurentian neighbors.  There are many good lower-tech 15mm ranges available to represent this.  If I was willing to open the wallet and give this game some time, I think my "ideal" choice would be Oddzial Osmy's NVL infantry, which would ride in Combat Wombat's newer Type 563 APCs.  Khurasan's Nova Respublik infantry and APCs would be another great option.

But I've wanted to complete my Rebel Minis Homeguard infantry for quite some time now, and they also have a good low-tech look and feel.  I finished one fireteam of Homeguard in early 2010, wasn't satisfied with the result, and left the rest sitting in the lead pile.  To get them ready for the Christmas War, I knocked out a test mini with a slightly modified paint scheme.
The washes were a bit heavier than intended, but overall I was pleased with the result (especially compared with my 2010 version).   I knocked out 15 more Homeguard in a couple hours.  They are organized into teams of four - believable from most military background viewpoints, and compatible with just about every set of rules in the world.  My basic Cimmerian fire team has three carbines and one rocket launcher:

I also included an assault team - two carbines and two flamethrowers.  These elements are led by a command team - three carbines and a designated marksman.  I included a light conversion - swapping a Homeguard head onto a standard Earthforce Command body.  Not a big stretch, since they are the same basic models.  In hindsight I wish I would have used a more interesting head, like a Micropanzer Veteran. But it gets the job done.

Now how about some support vehicles?  I have a platoon of Rebel Earthforce Wolverine APCs (the dual autocannon version) and a Merka tank set aside for my Homeguard.  But I've been thinking about some mecha warfare games in the future, so why not get a head start?  So I put together a Titan Marines HAMR suit, using the Recon arms and the Support missile launcher. 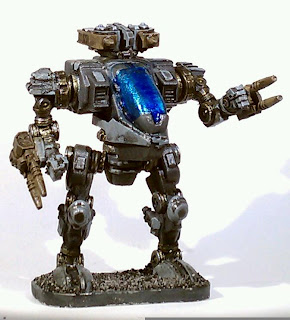 Every picture I took of it came out either too dark or too light.  The golden appearance on the servos and joints looks far darker in person - those components are Vallejo Gunmetal with Secret Weapon Armor Wash.  The HAMR suit is a good visual match for my Cimmerian infantry, but probably a bit more high-tech than I intend them to be.  Something like the Khurasan Federal DIMOGs or the Kremlin Rising Sun MANITOU probably would have been a better fit, but this will get me through the Christmas War.

This should be enough of a Cimmerian force to run the border-crossing scenario.  I'll add two more fire teams and another HAMR suit for the second battle, and I painted up some Cimmerian Special Forces (Laserburn Imperial Scouts) to include with the third and fourth scenarios.

FUBAR cards for my Cimmerian forces: 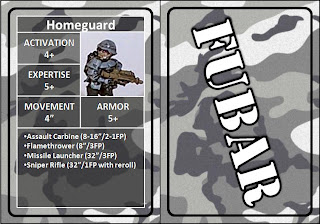 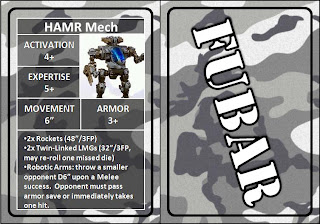