Last week we celebrated our 1000th post with news of a new 'Horizon' range of 15mm Sci Fi All Terrain Vehicles from Khurasan Miniatures.

Today, as promised, let's take a closer look at that Horizon Explorer All Terrain Tractor (A.T.TR). Well, what first strikes you is the passing similarity to the 'moms and pops' explorer in Aliens "It takes three weeks to get and answer and the answer is always Don't Ask!" 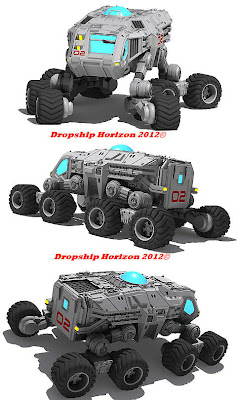 It has all the potential for being a great stand alone model, useful for RPG's, skirmish and pulp Sci Fi adventures as transport OR as a terrain feature in it's own right. I've suggested to Jon that an abandoned version, perhaps half submerged in sand with some separate bogies and wheels would make a great central terrain piece on a tabletop around which an adventure or skirmish game could be based, eg last stand of a group of adventurers against slavering hordes.

Now, if there was just one APC that The Stig would drive.....the IGUANA All Terrain Military Personnel Carrier (A.T.M.P.C) would be it. 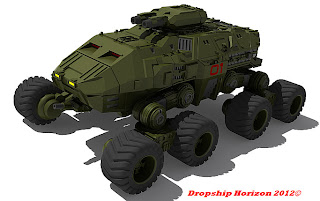 The IGUANA has a low profile armoured cab and a dual weapon turret. It's the perfect ride to get your Marines through bug infected terrain, or carry them across the moon surface to the lair of the Space Pirates. 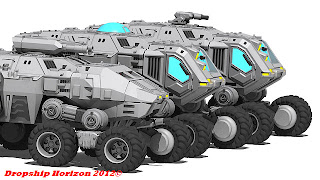 
And to round off, here is a comparison shot of the Horizon Explorer and IGUANA side by side. These beasts are in the Khurasan pipe and we'll keep you abreast of their development and release schedule as news comes.