Last summer, it was revealed that small miniature company Fate Amenable To Change had commissioned Antenociti's Workshop to produce a range of wheeled APCs. Those vehicles - the M577 series - were made available to the public as Salute, and are now being sold via the Antenociti's Workshop website. 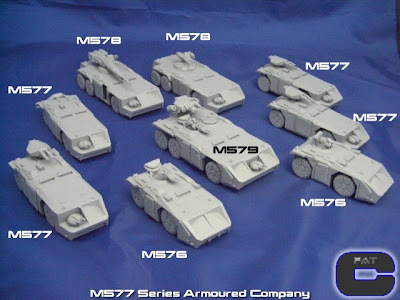 The M577 Armored Company Box Set (pictured above) is the best deal available. £57.15 gets you nine vehicles - four of the standard M577 APCs, two of the smaller M576 scouts, two of the larger M578 direct-fire support vehicles, and one M579 command vehicle.

If the armored company box set has too many vehicles for you, two smaller sets are available. The Headquarters Troop features one M579 command vehicle and two M576 scouts for £21.50: 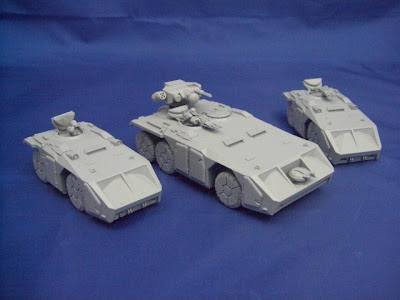 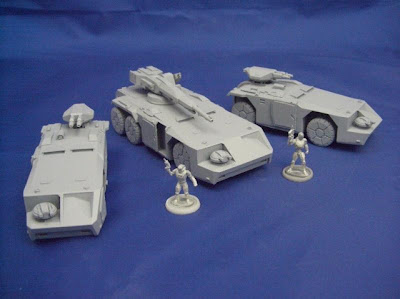 FATC will offer everything in this series as individual vehicles in the next few weeks. And if you're a fan of Hammer's Slammers - The Crucible, John Treadaway has promised that he will release a new Web Force based upon these vehicles (and the great figures from Armies Army).

Antenociti's Workshop has also expanded their own 15mm Governance Of Technology range with two civilian grav cars. The Dodge-Tata Matador Air-Car is the standard commercial taxi in the GOT universe: 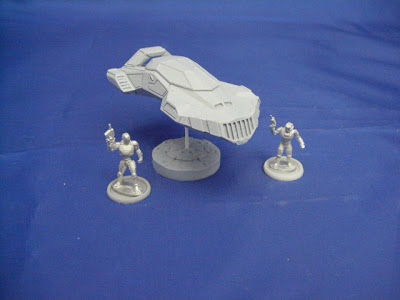 And the Hawker Evora is the preferred luxury sports car of the wealthy elite. 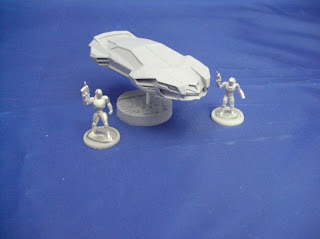 Both are available in 2-packs for £6.50. They would be great in small, narrative skirmish games (like 5150: New Beginnings and the recently-funded Ghosts of Hefei).
Posted by Chris K. at Wednesday, May 01, 2013