Bringing Sci-Fi gaming to the roleplaying masses. An after action report of the Big Game 12.9
For a number of years my local gaming club (TableTopNorth) in Belfast has allowed me to run participation figures wargames events.  These have become known as the Big Games.  On Saturday the 5th of April I had the privilege of running the latest Big Game.

With Fireteam Andromeda being my favoured set of sci-fi rules I wanted to use them.  At first I was baffled as to how to do it.  The heart of Fireteam Andromeda is the unique and incredibly subtle command and control mechanism which allows units already activated to take extra commands, known as active commands.  In various other circumstances units can make reactive commands.  I knew most of players would not be regular figure gamers and this would confuse them so reluctantly this mechanic had to go.  Instead in each activation phase each player would be allowed to activate one unit and take it through the four potential actions.  Regrouping to recover from morale or damage effects, moving, shooting (or running for infantry and mechs) and assaulting if desired for units that did not run.  Each unit in the game would have it's own unit card giving all the required stats for the player controlling it.


The two armies being used were my near future human faction the RPK and the Protolene Khanate dog aliens along with their snake like allies the Naga and various enslaved monstrous assault units.  The scenario was a fight over a droid factory complex.  The civilian workers had fled leaving completed droids and min mechs only requiring activation to join either side.  Humanoid units in contact with one of the factory units could do this in lieu of shooting or running by making a successful experience check.  Another fluff element was that the central control tower could be used contact the air force and call in an air strike.  Victory would be decided by which army was in control of the highest points value of victory locations at game end.  The four outlying buildings were worth two victory points and the central one three.

Here is the human deployment with some of the key assets labelled. 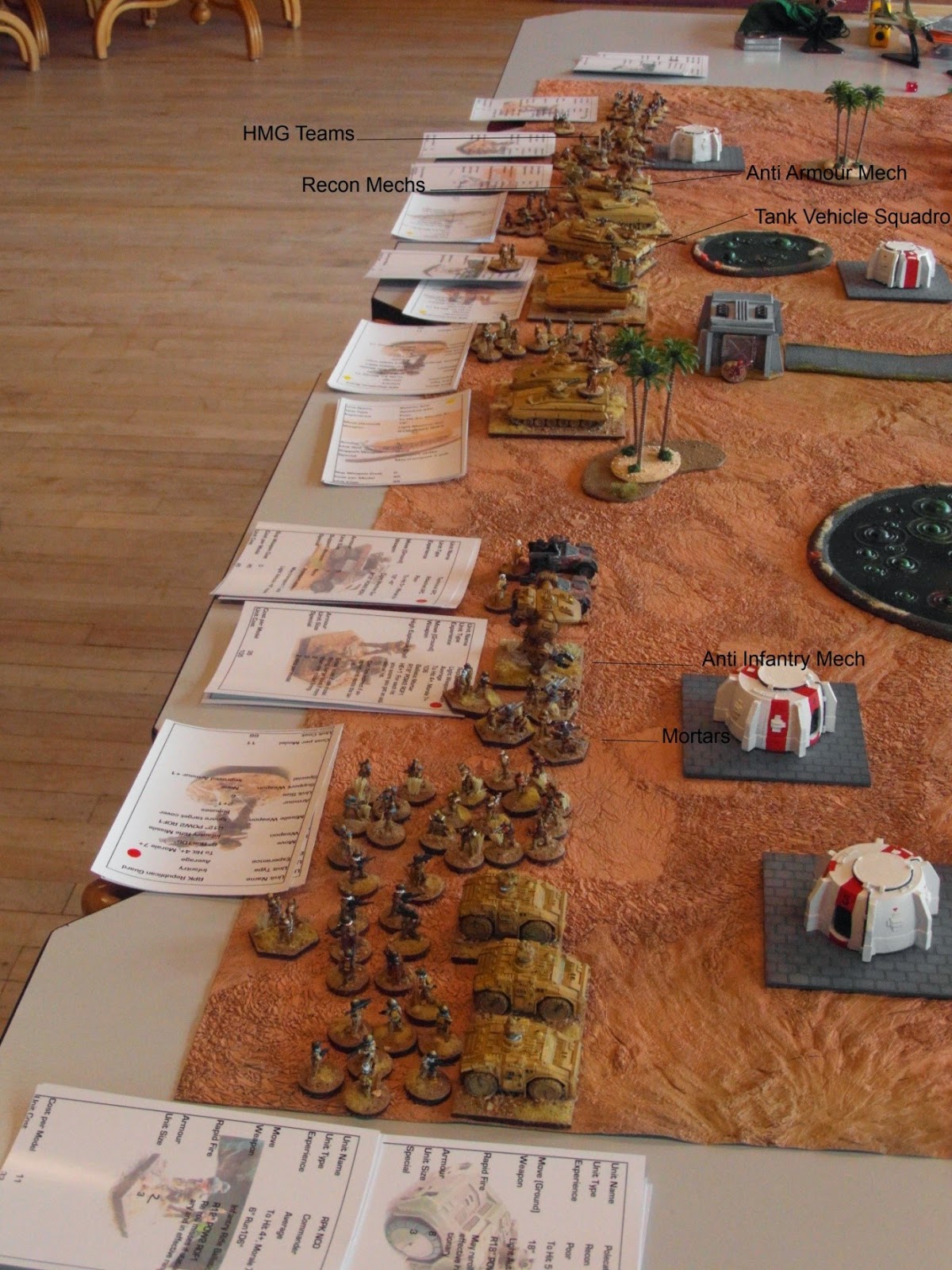 And the alien deployment. 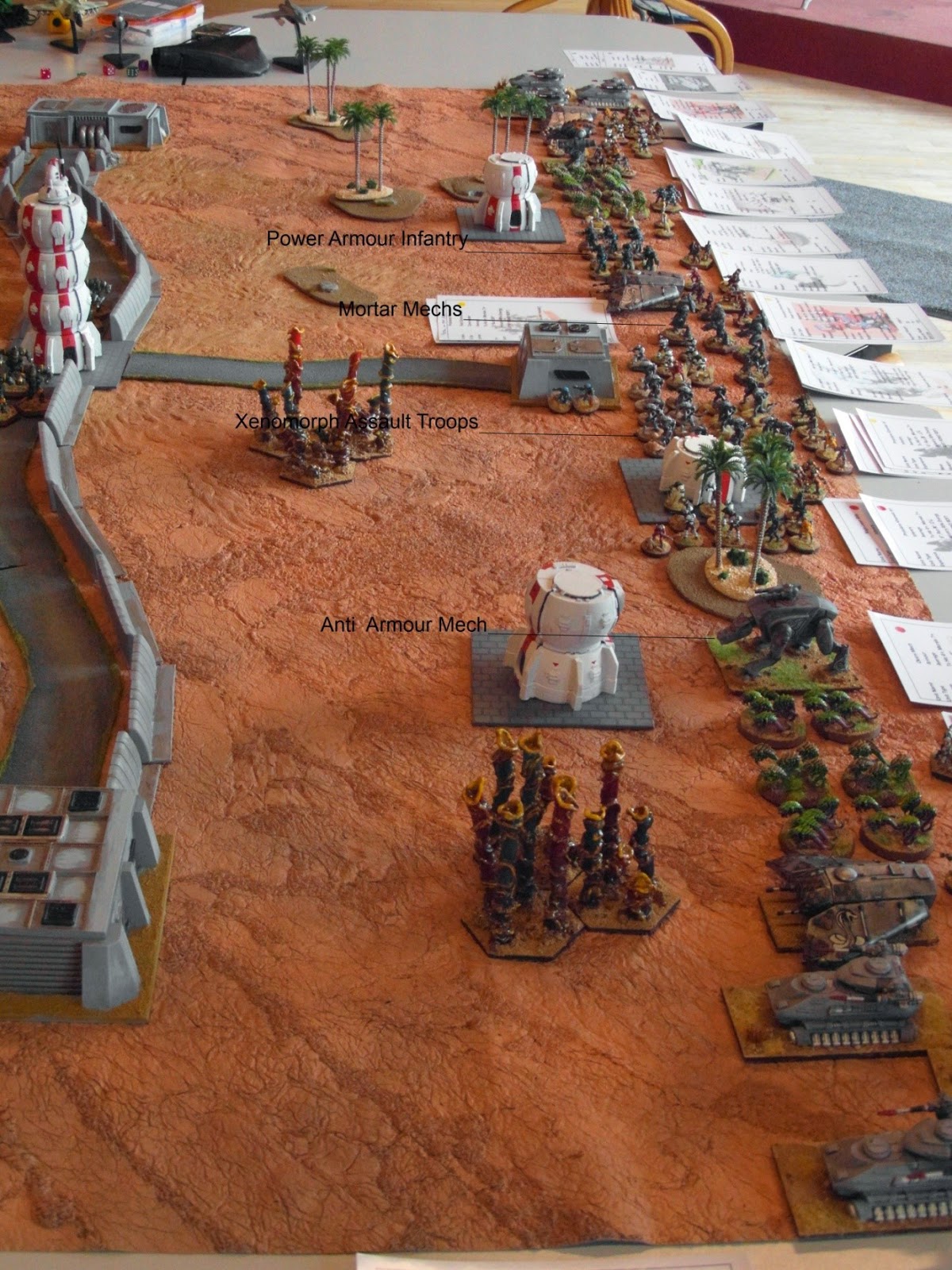 The aliens won initiative on the first turn and surged forward with their power armour infantry and xenomorph assault troops.  Surprisingly even though their mortars can fire indirectly they advance with them out of cover. 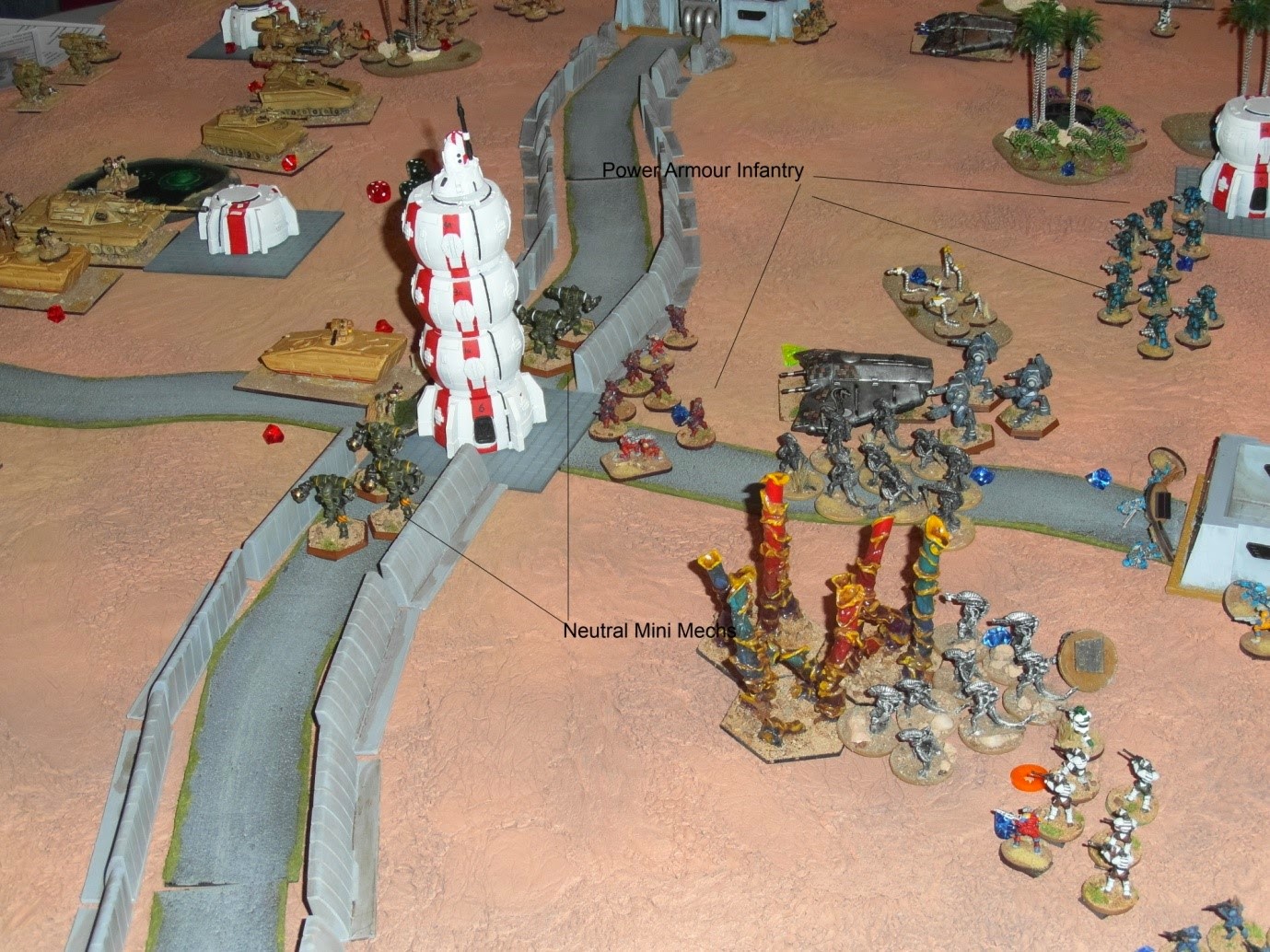 On the alien left flank their Titan recon vehicles advance swiftly and take little time to take out the human Polecat recon vehicles.  Most of the human infantry in this sector takes up defensive positions in the buildings.  They have missile launchers (RPG's) but only one per squad.  Their standard infantry rifles can only shake the recon unit at best.  Towards the centre of the battlefield tribal infantry takes shelter behind a wall from a xenomorphs assault.  I thought they might win this as they have close combat training and equipment.  They were also able to fire at the assault as it came in as they were not shaken. 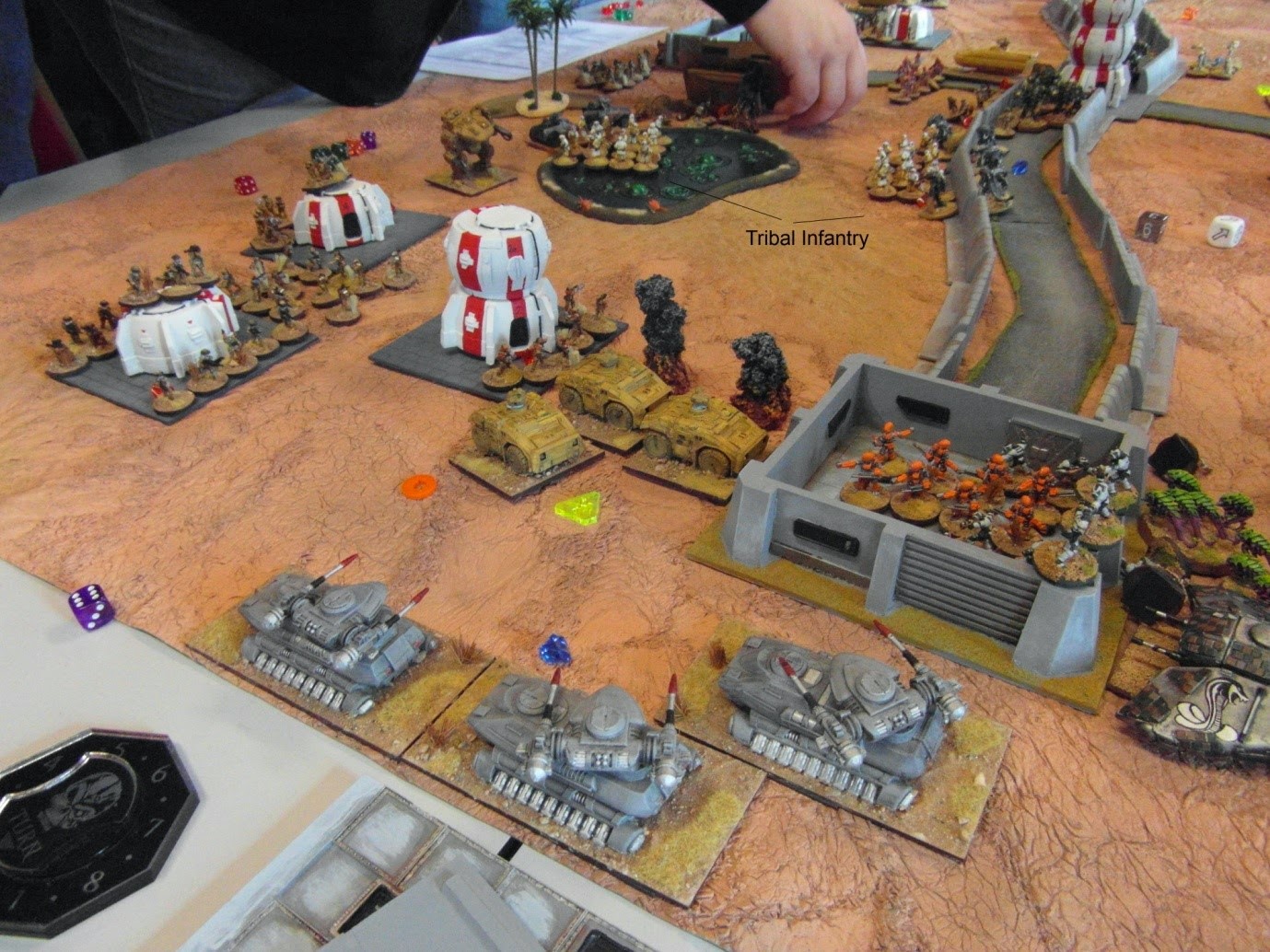 A unit of RPK infantry is caught still embarked on transport and suffers heavy casualties.  The alien mortar mechs regret their rash advance when two of them are destroyed by fire from the tanks. 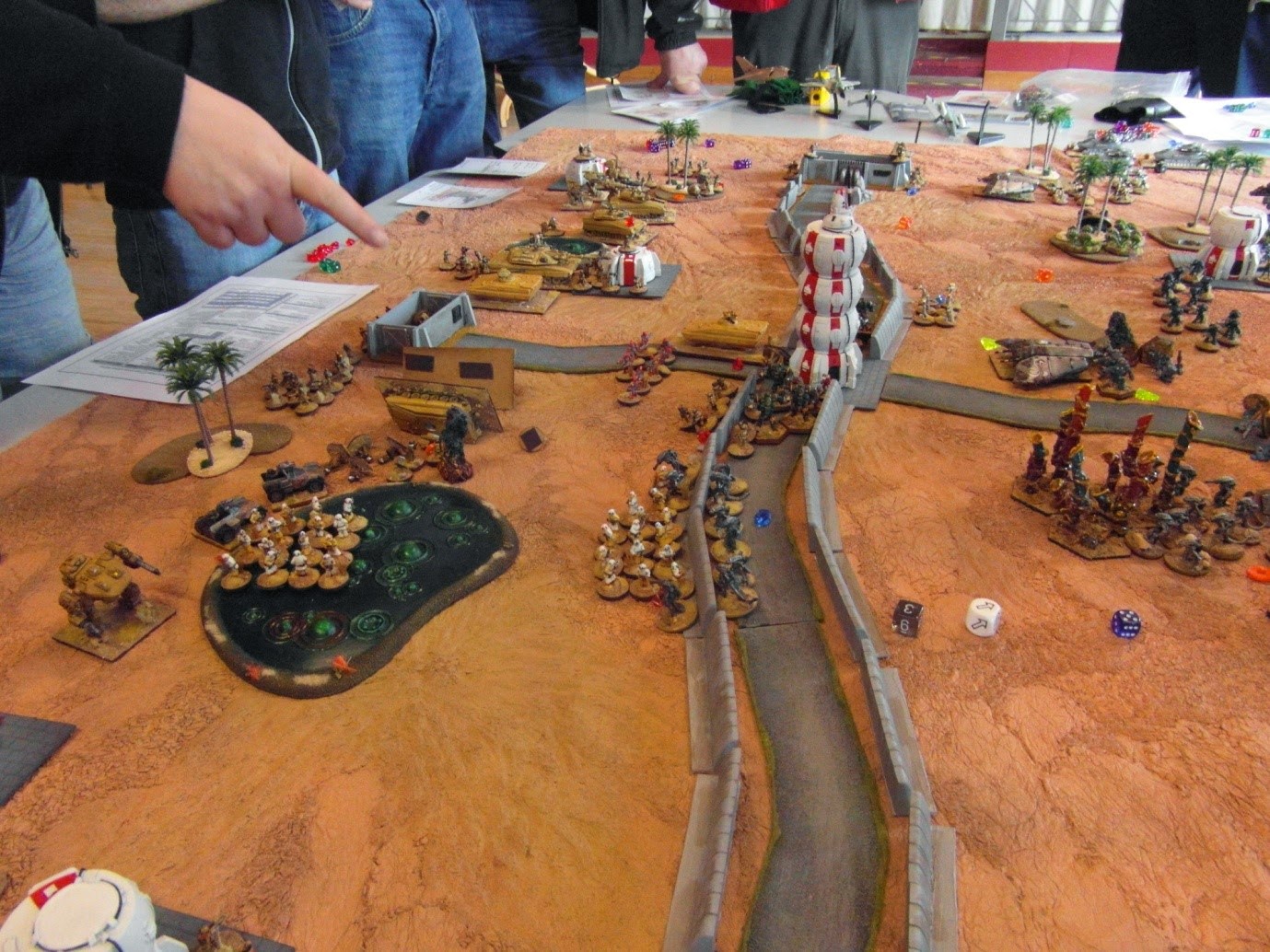 On the human right flank a unit of Republican Guard infantry assaults the alien recon vehicles. They do not have specialised assault equipment so the odds for success are not great.  In fact it was a good move as the assault dragged on stopping the recon from doing anything else.  Alien ripper assault troops close in on some hapless infantry in a building. 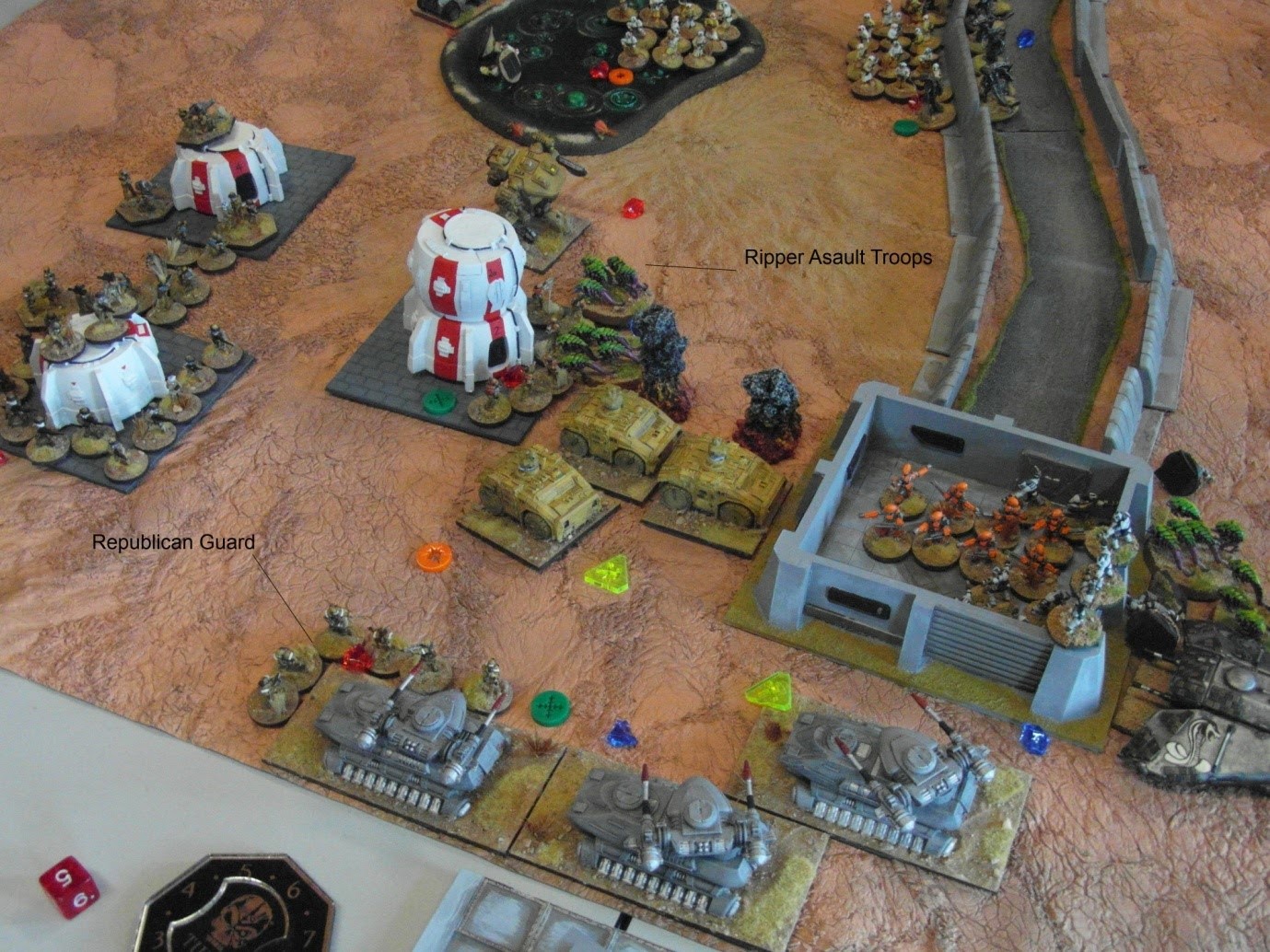 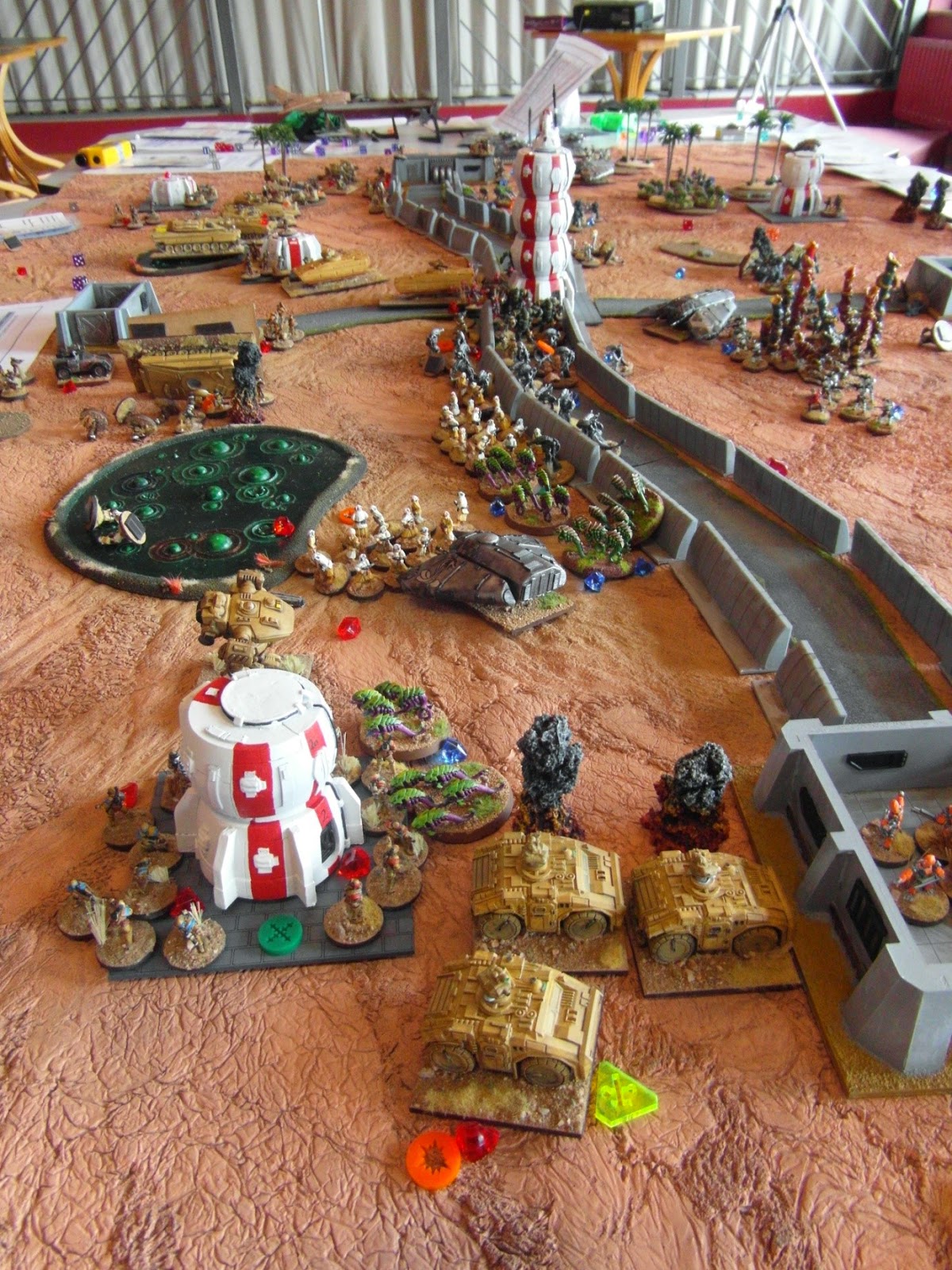 On the human left flank poor positioning begins to tell.  The recon mechs are armed with dual light machine guns so have a high volume of low damage fire, perfect against infantry.  They fail to find a suitable target or move away from the alien recon vehicles about to flank them. Similarly the Republican Guard HMG teams have gone to ground in a building without line of sight to any target.  As they are rated superior they could be having a devastating effect on the alien assault troops. 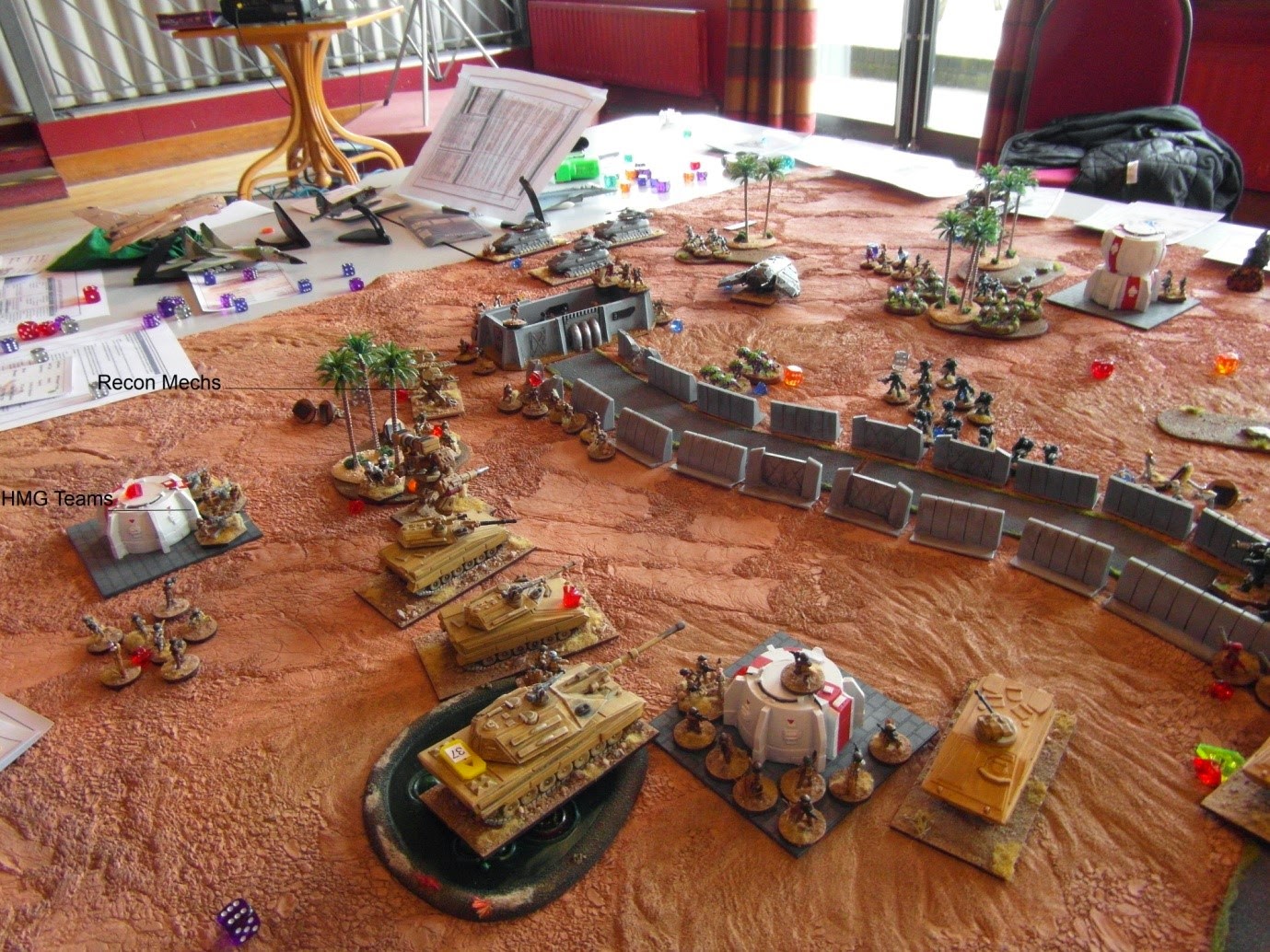 The human commander reaches the control tower and calls in an airstrike but it is shot down by the mech it was targeting before it even has a chance to fire.  I thought 1/100 was in scale but looking at this photo I am not so sure. 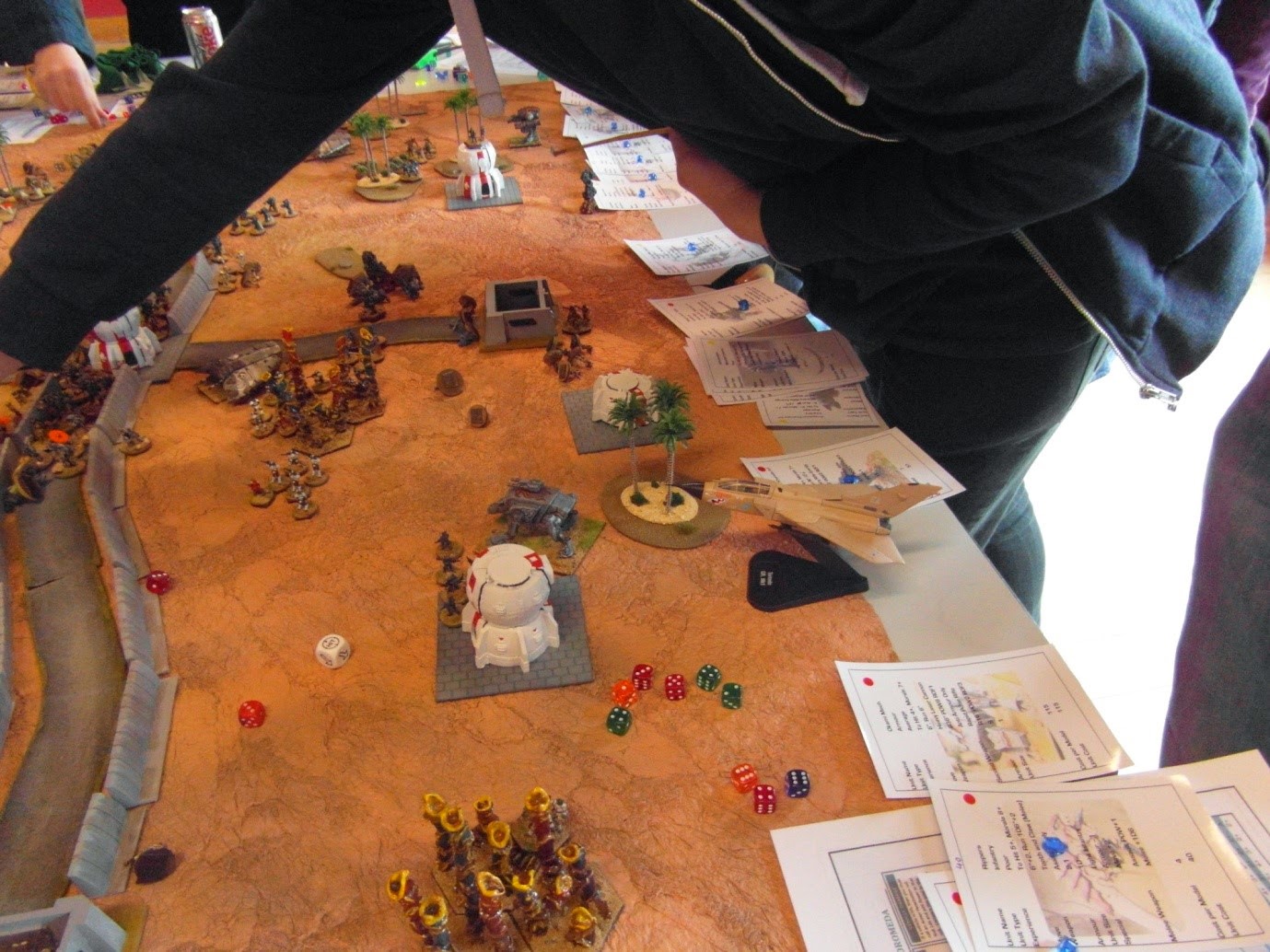 This game seems to have a lot of assaults.  The small group of xenomorphs in the centre assault again but are defeated and destroyed by the defending human infantry.  The tribals behind the wall lose the assault and are destroyed.  The other group of tribals win their assault against the alien APC.   This is the deciding moment of the battle.  The xenomorphs who have won their assault and are free to move again. 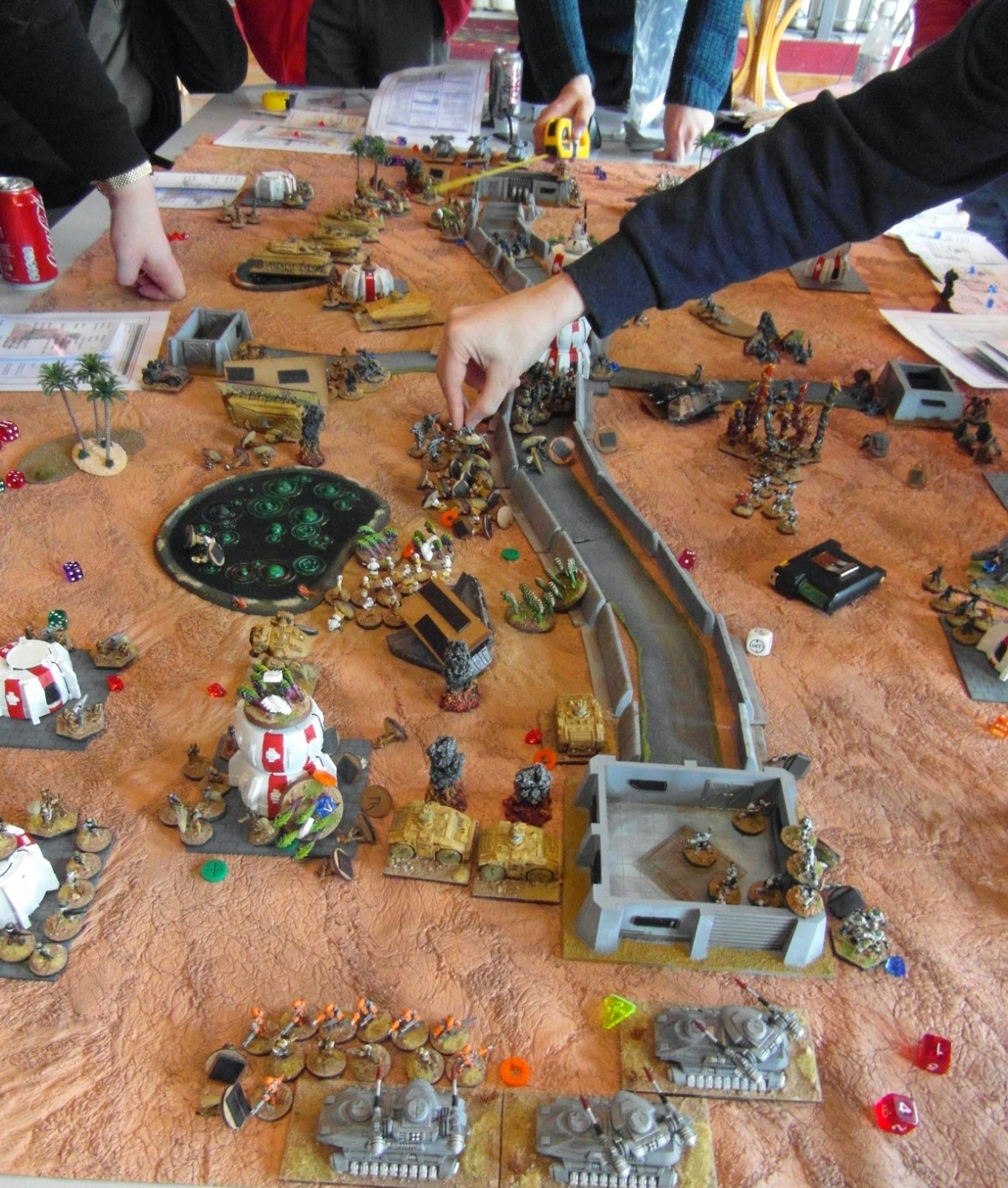 In the centre the victorious unit of xenomorphs advances to the objective building.   This disputes the objective and no points are scored by either side.  The aliens are able to claim the objective closest to their side of the table.  Their recon unit at the very top of the final photo destroys the human recon mechs leaving no human unit close enough to dispute control of this objective.  So a 4/0 win in victory points to the aliens. 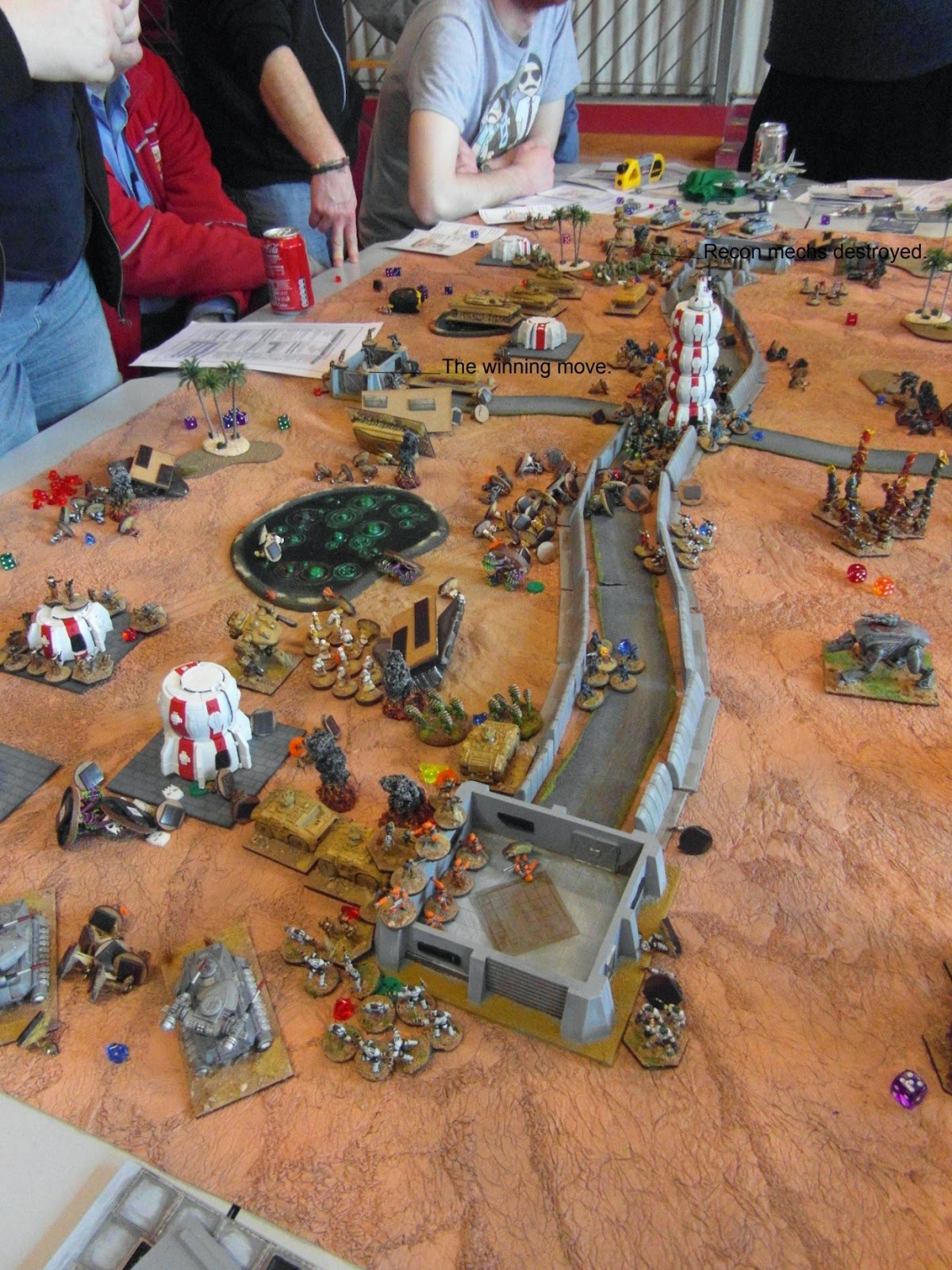 I have to say I thought theionage habitat pods and towers looked great.  There is a slight issue with stability after painting but the modular towers are much more stable than I thought they would be.  Some blutac made them solid as a rock.

I took some additional liberties in simplifying the rules (besides those already mentioned) for this participation game but I thought Fireteam Andromeda worked fine for this type of game.  As ever I was impressed with the solid maths behind the unit stats and points values.  Who knows one day I might even make a regular figure gamer out of those roleplayers...  The next Big Game is on November 15th hopefully using the Games and Gears urban battle boards.  Everyone invited, just message me on facebook if you want to attend.