Written by myself and published on WargameVault, SpecOps: a Gruntz Module is now available!


SpecOps is a Gruntz Module that brings the exciting second-to-second action of Special Operations missions and campaigns to the tabletop. 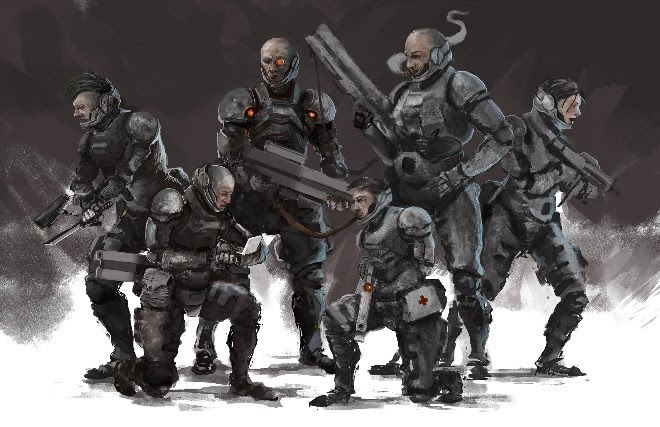 NEW TEAM TYPES: Choose from eight different types of teams with their own unique perkz each and further customize your troops with Species Traits to represent Aliens and Humans.

NEW OFF-BOARD RESOURCES: Light up your enemy with a UAV drone, or maybe an orbital strike with your new off-board resources.

NEW CAMPAIGN MODE: Advance your skills, build up your equipment stores and nurse your wounds with the new campaign mode that keeps your operatives from game to game.

The Gruntz Ver 1.1 rulebook is required for this module.

---
Here is a review of SpecOps.  Rocco was sent a Pre-release pdf for free in exchange for an honest review and feedback:

I was given a chance to give my opinion of the new Gruntz Module Spec Ops by Clear Horizon Minis, after speaking to Harold I was given a prerelease copy of the new module. What follows is my report of the new rule system for 15mm special operators in the Sci-Fi genre.

Right off the bat, the cover shows a night vision scene of two “Hell Divers” bounding with their tactical displays showing on their HUD (Head up Display), boldly displays the title and is eye catching and not over the top. The PDF is very well done with the rules being listed and written out with a natural flow that was very easy to follow. The PDF is also filled with the right amount pictures and original artwork so that it does not feel like filler.

Activation: This worked very well for our test games, we also for the hell of it tried random card placement for all the units on the table. Both worked out well and as I explained to my group. look at Activation as not just who goes first but who reacts first.

The Blip Mechanic: My first read through left me a little confused but after I played it I saw what you were trying to do. This worked well on a 2 by 2 table with ample terrain placed. This also put in a layer of tactical complexity that felt absolutely right. Moving the blips around and trying to stay out of sight until it was necessary to start the fight on my terms vs do I just open up on this blip exposing myself and driving forward came up a lot and was very interesting. The spotting rules felt just as natural as well.

Grenades: The new grenades were cool, and a great addition to the game. It did come up weather or not the grenade thrower becomes spotted if he throws a grenade. I claimed he did not and we played it that way. I found the grenades to be very useful if not overlooked. The Decoy grenade was a bit hard to follow at first but once we understood it creates a decoy blip that your opponent knows is a fake marker but can spot his markers at skill 3 became one of my favorite tools not forgetting the Hacker of course!

Reactive Fire: Very well thought out. This also left player with a lot of tactical decisions to make including whom to assign to overwatch (sniper and or SAW gunner) vs making a solid assault or a layered defense. Depending on the mission played an Operator on overwatch was vital because of the one spot rule. Being able to move the model being shot at 1 inch to avoid the shot but stopping the advance is a brilliant mechanic that adds realistic flavor to the game.

Shooting and the Weapons: Again very well thought out and I liked the range band modifiers for the weapons.  Most of the weapons felt right, I did how ever think the ranges on the Shotguns were too high and should be shortened slightly and the AE effect removed. I work with tactical firearms daily and shotguns are abysmal field combat weapons but Kings of CQB. In CQB with standard 00 buck 0-7 yards there is very little spread and at 15-20 yards is all you have for combat effectiveness anything after that range requires a slug with 50-75 yards being optimal effective range. Yes both calibers are deadly past these ranges but the probability of hitting a target and taking him out of action is low. Just my 2 cents and I know how difficult it is to make a game shotgun feel right.

Nat Net: Having a battlefield hacker proved to be a lot of fun and is useful as a Denial/Buff unit on your team and is one of my favorite team members. The rules are straight forward and easy to use and do not pull the players out of the action.

Team Building
I vote this be renamed “How to kill an entire afternoon making the perfect Black Ops Team” I’m a tinkerer and one of the things I love about Gruntz is making up my own Units. This was gamer cocaine to me and I loved every minute of it! The Point cap is spot on allowing me to make hardcore teams but not gods and of course the age old gamer question do I want Quality or Quantity? The off board assets and squad equipment are great and add flavor to the games we played.

Missions & Campaigns
The missions we played were Assassinate, Hostage Rescue, and Infiltration. All played smooth (as smooth as gamers can play before utter chaos erupts) and were easy to set up and run. I really like the campaign rules and am looking forward to getting one off the ground in the near future. The Injury mechanic is cool and reminds me of Mordhiem from days past. Unit advancement looked right and was not even remotely over complicated.

Conclusion
This was a fantastic module to play and we had a lot of fun play testing it. This game plays like a First Person Shooter on the table top and is fast and deadly! It also had a great amount of tactical gameplay to it that does not slow it down. Harold you and your team achieved what you set out to do.  I’m looking forward to seeing the final version once everyone’s input is shared. Thanks for allowing me the opportunity to give my opinion on this module.
Roc
End of Report…
Posted by Mr. Harold at Friday, February 06, 2015