IN THE PIPE... 15mm Xenomorphs

There is an ancient nightmare in the consciousness of many races.
A terror that transcends the reaches of galactic space.
A horror waiting, quietly, patiently in the darkness......
..... for mankind.

I'm pleased to be able to announce a new range of 15mm Xenomorphs in development at Khurasan Miniatures. Jon has been kind enough to provide me with photos of the greens as they've been sculpted. The detail and animation is just mouth watering!

Space Demon King - detail
With Jon's permission I will describe the background to the range and publish pics of the SPACE DEMON KING green. More pics of the various miniatures in the range will follow as they near production.

What I can tell you now is that you
are going to be blown away mister!


There are two types of Space Demon xenomorphs - Royalty and Warrior. 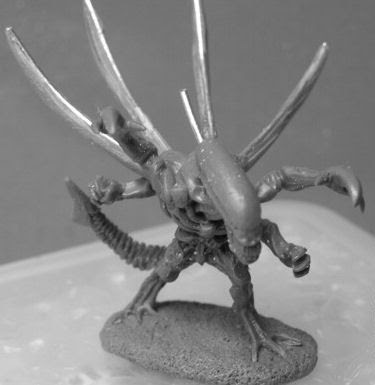 You're gonna need a bigger BLIP!