Following popular demand on TMP, GZG released a series of packs before Christmas with figures in Vacc-Suits, or 'spacesuits' to those of you from the Apollo generation like me. The cream of the crop has to be pack SG15-V15: Armed crew figures in light duty vacc-suits.

SG15-V15: Xeno Fodder!
There are 8 figures in a variety of combat poses armed with a medley of smallarms. This is the Science Fiction I grew up with - none of this W40K power armour and huge shoulder pad wimpery - but men in fragile spacesuits with shotguns and short range laser weapons boarding starships, fighting for control of a crater on the lunar surface or a engaged in a do or die struggle between humanity and bugs.

The figures themselves have more slender and human proportions than many of GZG's previous 15mm Stargrunt packs. I certainly welcome this change to the new style. On the Barrett Scale I would subjectively still regard them as a 15M. As you can see from the photo above, the detail is really good and lends itself superbly to an ink wash. 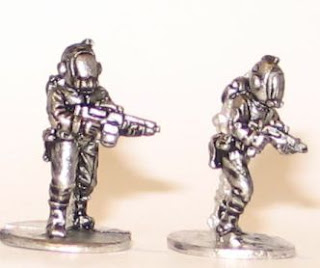 I want to highlight that I really like the weapons forwards, finger on the trigger, style of pose. A couple of the figures who have a more determined advancing into danger/combat stance are brilliant. This is just what I want from my miniatures and to my mind makes this the best pack of figures within GZG's 15mm catalogue to date.

I would really love to see a militarised pack of these figs with SAW, rocket launcher or heavy energy weapon and an NCO/platoon leader in more typical 'command' pose - leading or issuing orders. Nevertheless, I can't wait to lead these miniatures on their first space corridor guncrawl......