Brigade Models released upscaled versions of their popular 6mm Power Armor a few months back, and Tony Francis kindly offered us a review pack. With their Christmas Sale underway (more on that in a bit), it seems like the perfect time to show off these great figures.

The Power Armor figures are available in two variants - standard rifle and heavy weapon troopers. To add pose variety to this range, Brigade took an approach that I had never seen before in 15mm. There are three basic sculpts of the figure, but each sculpt omits the right arm. The right arms (with weapons) are a separate piece, with a thin peg which aligns to a dimple on the figure. I really like this approach. It allows for numerous small variations among the figures, but isn't nearly as fiddly as assembling separate heads, arms, and bodies.

To assemble the figures, I simply filed down the peg a bit, and used a pin vise to drill out the dimple. This gave me a very secure fit, with less risk of an arm breaking loose than just using superglue on a flat surface. And it's simple enough not to put me off building the figures, like some of the more complex multi-part figures out there. And the castings were extremely clean. There is just a bit of mold line to remove around the figure and the separate arms - no obvious flaws or gaps, or excess material on the cast figure base.

The figures themselves are very nicely sculpted. They have a nice bulk to them - suggesting that they offer far more protection than standard infantry armor. And the proportions are great. Many power armor sculpts (and not just 15mm) look nice as figures, but require some suspension of disbelief as to exactly where the wearer's arms, legs, and head are located. Not these figures. The upper torso would give a human (or humanoid) wearer full range of neck motion and still maintain protection. Human arms and legs clearly fit into the corresponding armor components, without any "surgical alteration" to the shoulders or hips. And the large "pod" on the back hints at the armor's power supply and life support equipment.

I saw these as good representations of "early" power armor - not quite as high-tech as offerings from GZG or Khurasan or Critical Mass, but every bit their equal on the battlefield. Since Brigade doesn't (yet) offer 15mm human infantry, I'd suggest matching them with a low- to mid-tech range when using these in a larger force. Rebel and Micropanzer would be good matches, but I decided to use the old GZG Free Cal-Tex infantry in my collection. Here's how they compare: 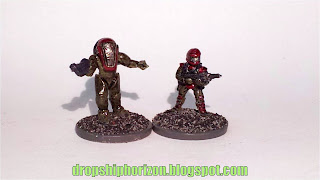 The rifle from the standard trooper is generic enough to mix with pretty much any 15mm infantry range. And the heavy weapons are also fairly generic - there is an over-the-shoulder missile launcher, and an underslung mini-gun. They really wouldn't seem out of place with any 15mm human infantry or vehicles, and would probably even work with the more humanoid alien figures available.

And in terms of power armor, they are on the bulky side of 15mm offerings. Which I think works to their advantage, because they will match with something as small as an RAFM or Oddzial Osmy trooper, or as tall as a Micropanzer SAS grunt. They are larger than most GZG power armored troopers, and are close in size/bulk to the Kremlin Red Banner MANITOU.

So if you're looking for power armored infantry, either to augment an existing force or as a standalone range, you really can't go wrong with the Brigade Models figures.

And there isn't a better time to buy them - Brigade Models is currently running their Christmas Sale. From Tony Francis:

Welcome once more to our Xmas sale. In the "if it ain't broke, don't fix it" tradition, we're keeping the same format as in previous years. Basically, that's 15% off all of our models, except for Celtos ('cos you can get 25% off those). Although there are a few exceptions, this isn't a '15% of selected items' or 'Up to 15% off' sale, it's a real '15% off everything' sale.

So once again that's 15% off all of our models - Aeronef, starships, Land Ironclads, 15mm and 6mm tanks, Squadron Commander, Iron Stars, WWI Belgians ... all except Celtos, where the Celtic Gods are being even more generous and offering 25% off

And that's it - no minimum or maximum orders, just a blanket discount for the whole of December. So what are you waiting for? Go out there and shop!

There are just a few exceptions and conditions, as you might expect ... percentage shipping rates will still be charged at the full item cost, since we were unable to persuade the post office to match our offers ! The discount covers our metal and resin models - it doesn't apply to rulebooks, dice, bases, game mats, Xmarx buildings or anything else that we don't manufacture ourselves, simply because the margins on those items are much tighter. However, starter packs with rules, dice or bases in are covered. Even with these limitations, we're sure you'll agree it's a mighty fine offer !

The website will still show the full price of each item, but the price that goes into the PayPal shopping cart will be the discounted one.

Something to keep in mind during - the Brigade Models 15mm vehicle ranges are being resculpted and recast. So if you have been holding off on any of the current vehicles, or you just need to augment an existing force, this might be your last chance to order them. Tony has mentioned that many of the current resin molds will be retired once they wear out. And work has already begun on their replacements - check out the Brigade blog for previews of the Neo Soviet and the PacFed vehicles. Tony hopes to release the first vehicles from those two ranges over the winter (depending on printing, cleaning, and casting), to be followed by resculpted German and Eurofed vehicles going into the spring. And some additional buildings will also be released throughout the coming months.