Colony 15 - In The Emperor's Name AAR 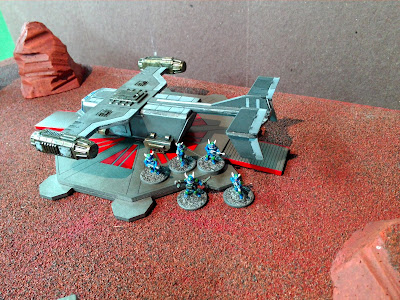 After painting and reviewing the Colony 15 figures from Darkest Star Games, I thought it would be fun to play a little game with them. It will be good to field larger armies of these figures as the factions are expanded. But for now, I had more than enough figures to play a small skirmish.

First, I broke out my template for In The Emperor's Name cards and had a go with the figures.


I envisioned the Star Marauders to be fairly well-trained (or, at least, experienced) human warriors who wander the galaxy looking for new things to kill (and spoils to take in the process). Not mercenaries - anyone calling the Marauders to take care of a problem would simply be replacing one enemy with another.

I called the command figure's weapons a "vibrosword" and a "machine pistol," and simply used the ITEN stats for a chainsword and bolt pistol respectively. And I beefed up his stats a bit: +3 to both Shooting Value and Fighting Value. This would make him a pretty tough foe. I gave Pulse Rifles to the other four Marauders.

With the Zonii, I see a native species bitterly fighting for their homeland. Sure, the colony was placed in one of their most holy valleys, but so what? The settlers compensated the Zonii with food and medicine, just like they had done on so many other worlds. It's not the colonists' fault that the Zonii were allergic to both...

I simply used Kroot stats and rifles for the Zonii Warriors - they're a close enough analog to work for a demo game. The riding beasts, however, needed a bit of extra work. I hadn't realized this before, but there aren't really rules for mounted infantry in ITEN. So I decided to simply build the beasts on their own, giving them a pretty high stats but a low Grit value. While together, the rider's Grit value would be used. But if the Rider was incapacitated, the beast would use its own stats. If they fail a Grit roll, they simply run away from the battlefield. To keep things simple, I decided to try using a simple Grit roll to allocate hits between the mount or the rider - if the shooter passes a Grit roll, they hit the target of their choosing; if not, they hit the opposite target.

Both armies came to around 125 points - a pretty small game, but playable. It might be worth trying this same scenario again with a more in-depth set of rules, like Blasters & Bulkheads. But ITEN is a nice, quick game for a weeknight diversion. Given the theme of these two forces, I built a simple colony on my 2' x 2' Red Planet board. All three buildings and the landing pad are from the GameCraft Minis Tomorrow's War range, and the shuttle is a Brigade Models Athena VTOL.

I imagined this settlement's inhabitants have already been killed, and most other sentient races would be content to leave it alone. But, low on food and other supplies after their last pillaging mission, the Star Marauders decided to make a quick raid. 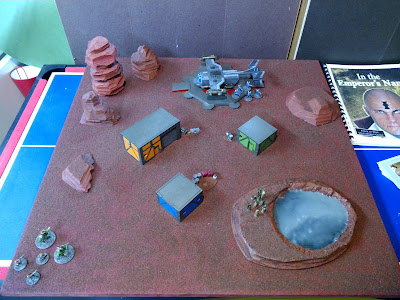 Setting their shuttle down on the landing pad, they were quickly met by a hunting party of native Zonii. Commander Vekel quickly moved his Marauders from the shuttle and into firing positions. The dismounted Zonii fired and advanced toward the larger building, but their primitive weapons simply couldn't penetrate the Marauders' more advanced armor. The Marauders returned fire, incapacitating both riders.

Spooked and angry, the beasts continued to charge. Commander Vekel led two Marauders to the closest building, while the other two provided covering fire. The beasts clashed with the Commander and  his men near the small green building. Their claws and beaks were sharp, but Vekel's sword made quick work of the first one. 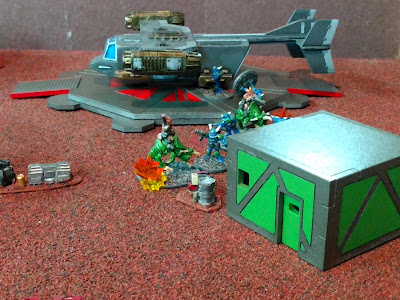 Vekel angrily charged the three dismounted Zonii at the larger building. The two Marauders on the platform dropped one, and the other two charged at the Commander. They were no match for him. 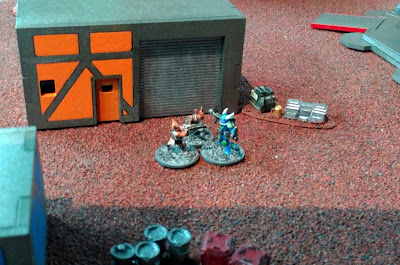 Meanwhile, the second beast ripped apart the two Marauders at the green building. Still fighting, it made its way to the platform. The beast knocked out both remaining Marauders, but was finally caught by Commander Vekel. It ran away after one round of combat with the Vekel. The Star Marauders hadn't exactly achieved victory, but it appeared they survived the fight. 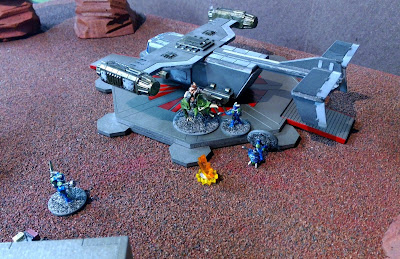 I rolled for the two knocked-out Marauders at the end of the final turn. One recovered, one didn't. While the final body count made the scenario feel a little imbalanced, I did roll an awful lot of ones for the Zonii. If the dismounted Zonii had made better use of cover (or simply rolled better), the game could easily have gone the other way. Overall, this was a furious and enjoyable little skirmish.