As you might remember, we introduced you to Darkest Star Games about a month ago. Darby sent me review samples of the first Colony 15 figures, and I've finally had the chance to get them painted and to take a few pictures of them.

First off - I can tell you that it will be a pleasure doing business with Darby. He told me the figures were on the way, and they arrived just a few days later. The level of customer service provided by the 15mm manufacturing community continues to amaze me. The figures themselves are cast in what seems to be the "standard" flavor of pewter - crisp details and just a bit of softness to straighten small details or to convert the poses (I only mention this because some figures have been cast in harder metals lately; Oddzial Osmy for example). The figures from each pack are actually cast in small sprues instead of individually - similar to ArtCrime Productions and some of the old Asgard lines. Here's how they look right out of the packaging: 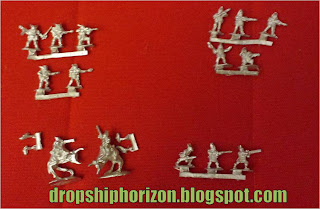 The integral bases are very, very thin - something I genuinely appreciate. With some figures, I either have to use a large file to remove huge "blobs" of pewters, or I end up with figures who look like they are surfing on a huge boulder. Thin integral bases like these easily disappear onto the coin, washer, or whatever else I use. There was just a bit of flash on a couple castings (mainly the Zonii mount beasts), and the mold lines were very easy to clean.

Since I've always hard a hard time seeing detail in bare metal, I waited until everything was painted before giving them a true look. My early favorites were the Star Marauders, so I painted them first. Since the helmets vaguely reminded me of Chaos Space Marines, I decided to paint them in a 40K-inspired paint scheme. I figured that would let me use them in both Space Crusade-inspired guncrawls and skirmishes using In The Emperor's Name. I chose the (suitably gaudy) green and blue scheme of Alpha Legion.

And once I had them painted, it was pretty clear that my premise was flawed. They aren't wearing hardened or powered armor - there are obvious fabric distresses on the arms and legs. But heck, it will still work for my purpose. The figures are nicely detailed. They look like they are wearing suits designed for hostile environments, with self-contained breathing equipment and multi-spectrum eyepieces. The "horns" are actually sculpted at slightly different angles from each other. It gives them less of an assembly-line appearance - perhaps these warriors forge their own horns, or they have at least some sort of individualized significance. Each trooper is also wearing an assortment of packs and pouches.

Four troopers are carrying  energy rifles, and the leader is armed with a nice melee sword and a type of submachine gun. The leader's gun hand is bent sharply at the elbow - the gun almost looks like a prosthetic arm from the front, but looks fairly normal from behind. And its pose is very "rpg character" in nature. There are no heavy or special weapon poses in this initial pack... hopefully they will come later, along with some more ornate command figures. And they would be good candidates for fast, well-armed vehicles. But as they are now, they are good space opera troopers. And they will be fine opponents for my Blue Moon Orion Republic warriors.

Oh - something I learned well after they were painted: these figures were probably inspired by the cover of an older novel. So if my gaudy color scheme isn't doing them any favors, have a look at this:

Moving on, we have two different packs of Zonii - a primitive native race that is a constant thorn in the side of the Colony's defense forces. The first pack contains three Zonii foot troopers, armed with clumsy (but nasty looking) rifles, and the second is two different Zonii mounted on a really cool looking dinosaur-bird thing.

Again - no lack of detail on these figures. I gave them a fairly simple color scheme, but there are plenty of different approaches that could be taken. The riding beasts are also nicely detailed. The arms/claws/whatever on the beasts were separate pieces, so it would be possible to create a little bit of variety among several packs. But the riders are integrated into the bodies of the beasts. I personally would have preferred separate  riders, just to mix-and-match the Zonii with their beasts, or to give them a different mount to ride. I guess I'm picturing something more like the old Asgard mix-and-mount aliens, which offer a bit more flexibility even if the poses are rather dated. 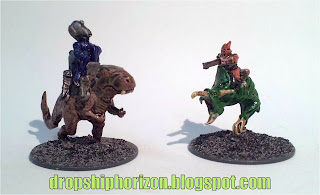 Plus, the beasts could be useful on their own. Hopefully these receive enough support to be fleshed out with a few more options. I envision this as a fairly simple army - probably wave after wave of the dismounted warriors, with several units of the riders flanking from the outside. In fact, the lack of any technological weapons or equipment would make these ideal for VSF gaming. I might have to use these against some Black Hat Martians in a low-tech game of Mutants & Death Ray Guns. They would also be ideal Primitives in Alien Squad Leader armies.

Finally we have the Magravate Militia. I was a bit lost on what to do with these guys. Their helmets are very Space Elvish in nature, and their weapons have a high-tech and somewhat alien appearance. But their clothing actually seems quite conventional - basically fatigue paints and utility jackets. So I decided to play up the Militia aspect, and gave their uniforms a very utilitarian paint scheme.

I was going for a dark leather effect... not 100% pleased with the results, but it's mostly because I haven't figured out where they fit into any of my current game settings. There's nothing wrong with the figures themselves. The pack arrangement is pretty similar to the Star Marauders - four rifle-armed troopers (three in advancing/shooting poses, one somewhere between advancing and marching in a parade) and a leader in a "personality" pose.

My only real quibble with the Magravate Militia is a very small detail - the helmets. The right-hand figure has a "disc" sculpted onto the helmet, but the command figure doesn't. Personally, I think it would have made more sense for that to be on the command figure - for some type of command identifier or unit marking. But overall it's a solid pack, and ripe for expansion into a battle faction. As a militia, I could see these guys using lightly-armored, low-tech vehicles.

I'm pretty impressed with this initial launch. Darby has a nice vision for this range, and Bob Naismith's sculpting has brought it to life. These figures will be right at home in games like Blasters & Bulkheads, and I expect to see them fielded right alongside (or against) other Space Opera figures available now, and developed into complete armies as Darkest Star Games continues to grow.