15mm GARN: Close Up and Personal 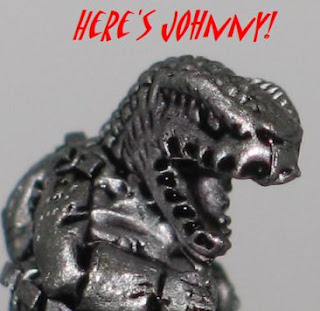 One of the most anticipated releases of the year, Khurasan Miniatures 15mm Sci Fi Garn Warriors will not fail to disappoint. I suspect these new miniatures will become THE alien scumbags of choice amongst the 15mm Sci Fi gaming community. 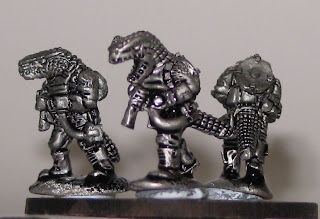 15mm Khurasan Miniatures
Garn Warriors
Front and rear views of the Garn. Note that these miniatures do not have their weapons attached yet. All figures are sculpted as firing from the hip. The weapons come on a separate sprue and have a small spigot which fits into the hole you can see on the central figure. Take notice that the magazine is already moulded grasped in the right claw.

15mm Khurasan Miniatures Garn Warriors
Comparisons with other manufacturer's human miniatures
This photo illustrates how solid and powerfully built Garn warriors are compared to humans, yet they do not look 'oversized' , or out of scale in any way. Playing around with the unpainted miniatures, I placed two on a base with the Rebel Earth Force Marine and they looked like a cool mixed species 'mercenary' unit.

The detail on the figures speaks for itself. I particularly like the prominent 'brow' feature above the eyes as it adds both 'menace' and character to the individual Garn models. These are minis you can easily develop empathy for and will want to command on the tabletop as your primary 15mm Sci Fi force - perfect for the upcoming AMBUSH ALLEY Sci Fi variant.

Remember to click on the photos for larger images!
Cheers
Mark