.
Hitting the cinema screens in March 2011 is a Michael Rodriguez, Bridget Moynahan sci fi blockbuster billed as "very intense, like Black Hawk Down but with aliens in it". 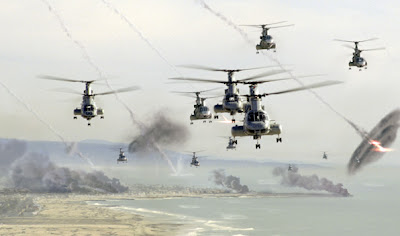 "Drive-by: Los Angeles style"
Battle: Los Angeles: Coming 2011
This pic made me thinkof GZG's AV-7 VTOL 'Fan Vans'
Inspired by footage of soldiers in Iraq, the movie focuses on one particular marine battalion fighting right in the thick of an alien invasion of Los Angeles.

The team behind the movie wanted to present a 'realistic' a picture as possible of an alien invasion, and worked hard to ensure the aliens, their machinery, how they arrive all had a purpose. The aliens have tactics. How they work together and everything they do was designed to feel functional and very real.


Looking forward to it!
Cheers
Mark
.