.
This week I picked up a flight deal of GZG's AV-7 'FanVans', giving me four in total now. I like these stylishly boxy fellas which can double as 'dropships' as and when required on my tabletop. 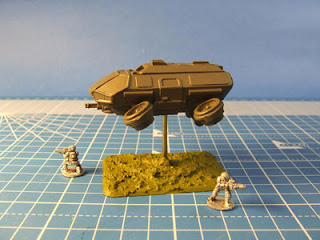 GZG 15mm Sci Fi
V15-80A AV-7 'FanVan; VTOL
In Tom.War they are more than just a flying truck and have real character 'on', or should that be 'over' the tabletop.

To support Jon's new Federal Infantry and as I have a little more security in my job for the next few months or so, next purchase on the cards will be two of Micropanzer's 15mm Warbots. They just look so cool! Plus I want to take advantage of Jason's pre-release offer price of $10 each if purchased before end of September. 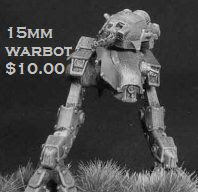 Micropanzer 15mm Sci Fi
Warbot
I might just add  the Alien Special Promo deal at the same time. The deal includes 1x Overlord, 4x attack hounds and 36 swam aliens (12x of each pose) for a total of 41 figures. Perfect force in a bag for Tom.War or Alien Squad Leader V0.2! They'll also double up as VSF Martains, Post Apoc mutant nasties and as allies for Khurasan's Lhurggs.

Critical Mass Games are releasing Kamaados APC and Scout car variants on the 20th September. I like the look of the Scout Cars and think they will compliment Rebel Minis new Infiltrator Bike, another JBR masterpiece, but I'm holding back for the main purchase in October - a platoon of Dragamaa Heavy Tanks.

I'm expecting the new Heavy Weapons minis will re-energise my Light Recon troops. Might even use these figures in their own right as Commandos with BFGs.