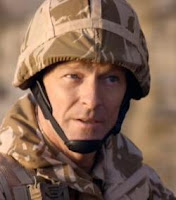 I can take or leave DR WHO these days, but I really did like some of the imagery in the The Time of Angels episode from the latest DR WHO series. I enjoyed the ALIENS (1986) feel to the epsiode and found that the premise of the soldiers being fighting clerics resonated with me. More so because they were equipped with modern battledress rather than clerical habits or fancy Sci Fi'ish armour with flutes, flanges and flowing cloaks. It was a down to earth "We fight evil. It's a dirty job and someone's got to it" kind of approach.

Father Octavian, Bishop Second Class, and his troops of New Byzantium (my interpretation here) would make a 'different' Sci Fi force for TOMORROW'S WAR, or even ASqL2.0 in the mould of interplanetary Knights Hospitaller.

Even the motto gives you a sound background and motivation for the force. Scenario ideas are beginning to flood already. Must definitely get those Micropanzer Aliens!


"Hostiles with built-in turn-based behaviour. Could make for very interesting games. Watch your lines-of-sight and pray that your characters don't fail their blink-test."

These two sentences were simply inspirational for creating the vision of a game in my mind. In Tom.War terms we're talking a Quality Test for the 'Blink Test'. If Amy Pond and you know who are not your thing, then leaving behind any reference to DR WHO, a similar game could be achieved using these ideas with Khurasan's Space Demons, the hammerheads especially, in a setting inspired by PITCH BLACK (2000).