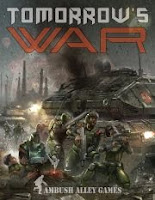 An update on the Tomorrow's War pre-release PDF from Shawn:

The Tomorrow's War expansion will sell for $15. USD

Tomorrow's War bundled with the printer friendly version of FoF will be $5 USD more, for a total of $20. USD

This is a pre-release version – it contains the core rules for the stand-alone Tomorrow's War print version that we'll be publishing with Osprey in September of 2011. It doesn't contain all the fluff, photography, or AMAZING art you'll see in the final version, but it does have everything you need to play. There will be a few minor differences in next year's version to reflect the changes we're making in 2nd Edition FoF – but honestly, most of those changes are relatively minor.

TW does contain our re-worked vehicle rules, though, so you'll get a sneak peek at what those will be like in FoF II, albeit in a SciFi setting.

We're putting it out this way as a service to our fans whom we assured would have the game this year – it doesn't seem fair to make them wait till 2011 for something just because we entered into a new business arrangement. We're doing the bundle deal for those new to our games who want to get a jump start on Tomorrow's War.

Release is imminent – a layout draft is with our layout artist. I hope to give you all a solid release date Monday.