I envision the Laurentians to be a fairly high-tech army.  Technology and automation play a pretty significant role in their background, and I wanted to reflect this on the battlefield.  One army stood apart from the others on my display shelf - Rebel Minis Droptroopers with CAT 'bots as support weapons. 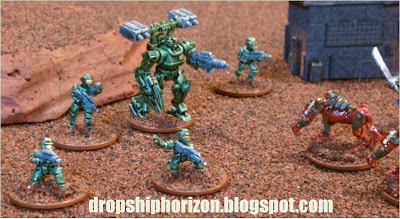 I never did get around to finding vehicles for this force.  But I have plenty of infantry and CATs to portray the defenders.

The only thing missing was some elite troopers to use in the second scenario.  I thought about just painting more Drop Troopers in a different color (Spartan red or blue?), but this army needs a bit more diversity.  And I like power armor.  So I tried my "300 Second Spartan" scheme on a pack of the new-sculpt Ground Zero Games NAC Powered Armor with Hand Weapons.

Exactly what I wanted!  These sculpts works surprisingly well with the Halo-inspired Rebel Drop Troopers. And the Y-rack mini launchers are similar to the rockets found on the Rebel CATs.  The new NAC power armor are actually fairly small compared to most infantry out there - especially small compared to similar power armor from Khurasan or Kremlin.  But the Rebel Droptroopers are also a bit on the small size, so they work extremely well together.

I just need to finish a few terrain pieces for Scenarios 1 and 2 and this force is ready for The Christmas War.  And since I'm going to use FUBAR to play the first couple scenarios, here are my unit stats for the Laurentian Defense Forces: 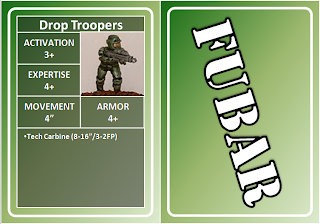 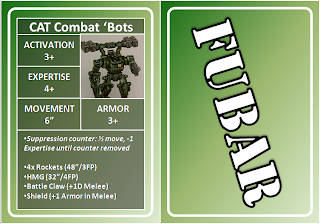 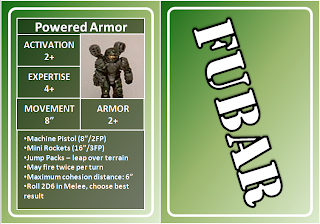