Mad Robot Miniatures Harook are now available, and once again Steve sent an early pack so I could write this review.  The Harook are another one of those lines developed from a TMP thread (started by our own Eli) - see that original discussion here. 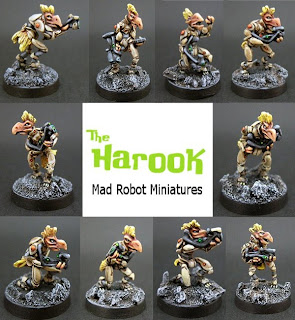 As with the TMC Jump Troops, the Harook are excellent castings.  Mold lines weren't visible on any of them, there were only a few strands of heat-vent flash, and the detail is exceptional.  The bases are just a bit thicker than I prefer, but nothing more than you'd see on most Critical Mass minis.  It only took about ten minutes to file them all down and get them onto painting sticks.

There are ten unique poses in the pack, just like we saw in the preview.  Each has a unique, and all but the command figure are in dynamic action poses.  And they're tall - it's easy to imagine they evolved from some kind of large terror bird.

The details really popped once I sprayed them white and hit them with a quick black Wonder Wash.  Pedro Navarro knocked these out of the park when he sculpted them, and they translated very well into the final product.  These are perfect space opera aliens... the beaks are big without being cartoonish, their uniforms are distinct, and their weapons are fantastic.  They look completely unlike anything a human would consider a gun, but there is no doubting its purpose.  Inspired by the college football game I was watching when these arrived, I eagerly painted a test figure. 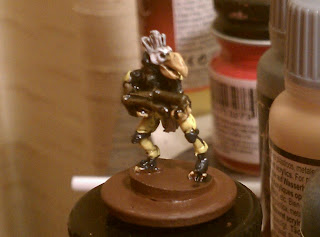 These should be a great opponent for my Hammer's Huskers mercenaries. :)  I knocked out a few more troopers and the commander, which is probably my favorite figure.  He's carrying one of those one-handed tablet devices that is becoming so popular on 15mm command figures.  I don't know who thought of that first, but it's a great idea.  Those things can be a medical scanner, an artillery coordination controller, a remote for a heavy weapon or recon drone, or even just a simple radio or GPS.

For now, the Harook offer a great squad of grunts or elite troops - perfectly suitable for a small skirmish, or as part of a larger Alien Legion-style army.  But the range is far from complete.  The Harook are going to be fleshed out into a full army very soon.  A command squad, plasma and SAW gunners, and crew-served weapons will be available next..  Mad Robot has shared this concept art as a promise of things to come: 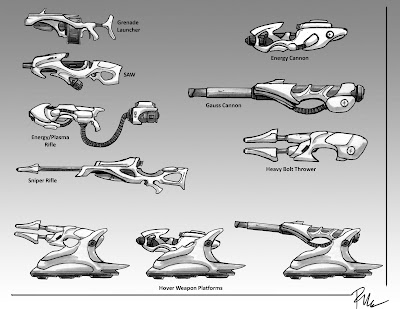 And I've been told there are some even bigger plans after that.  I can't go into the specifics, but let's just say the Harook will receive something that rhymes with "mopship" and helps them get to the battlefield quickly.