Where orbital fire support can't reach, heavy fire support for the highly mobile, elite Federal Navy SPAR special-ops teams comes in the guise of the Neptune Tactical (Tac)Mech. Dropship Horizon can exclusively lift the cover on this exciting new Mecha that will be smashing it's way into 2012. 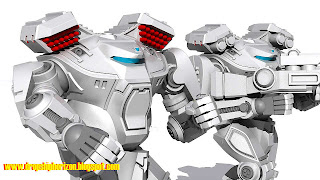 The Neptune is heavily armed, mounting shoulder weapons-pods in addition to carrying the plasma rifle.  The pods can be easily swapped depending upon mission requirements. Pod options include anti-personnel rockets, tank-killing anti-material torpedos, or a general purpose energy cannon. 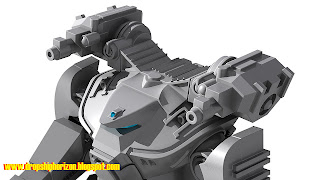 But the key to its success, is its ability to pick its way through difficult terrain and manipulate large objects, moving obstacles out of the way, smashing down barricades or through internal bulkheads and pressure seals to allow the SPAR team to gain it's objective.

The Navy deploys the TacMech from the Poseidon Stealth Lander and can retrieve it the same way.  Whilst the TacMech was designed for special ops, its considerable battlefield power makes it heavily in demand in conventional fights as well. The Neptune occasionally assists Corporate Marine recon operations, as the Federal Marines are accustomed to fighting in close co-operation with the Navy. 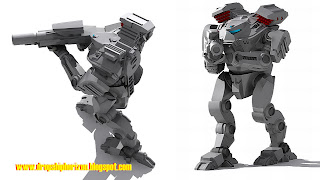 
The Neptune TacMech from Khurasan Miniatures will be available in early 2012. The model comes with two leg choices and available with either free hands or plasma rifle, and will have three shoulder mount options as indicated above. Fully assembled the Mech will stand approximately 55mm tall.

This is a mean tin hombre to support some equally mean dudes in the Federal Navy SPAR Teams. Hooyah!