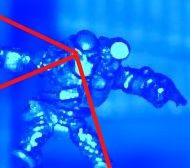 I'm playing this in 'cinematic' mode with both Predator and Colonists/Security being run by a set of Reaction Tables. I had fun creating these on the train this morning. Well what else do you do at 6.30am on the Inverness train?

I admit the Reaction Tables are fast and loose but sound enough to have a fun game with. And it was. 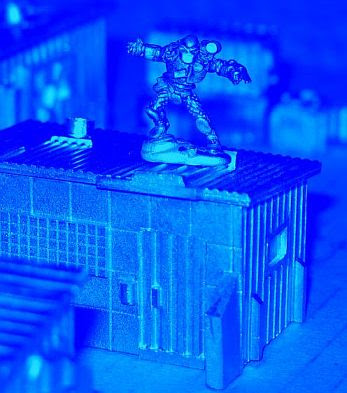 The Predator bounced from shanty to shanty as the rules dictated. The occupants rolled against a table determining their actions - stay inside cowering, Vidcast for help, step outside to see what the noise was, pick up a gun (if they had one).

The Predator meanwhile could watch and wait, change position (jump to another shack), fire (energy weapon, disk or spear) or attack (close quarter slice and dice).

Anyone coming out of their shack had to be scanned as a threat, so the Predator lost an 'action' die.

Security could take cover and observe, investigate, go tactical, open fire, call for back up.

I used a bastardised version of the Tom.War rules, Predator leaping from roof to roof, coming down to street level once to slice and dice a security team. He finally withdrew after his armour malfunctioned and being wounded twice. However he had bagged 2 armed colonists and 3 security guards.