.
Well, only part of my workbench - I just took the snap to send to Master Chef before I finished the Old Crow 'Ghost Recon Advanced Warfighters' - to illustrate my '30 second desert cammie' finish. 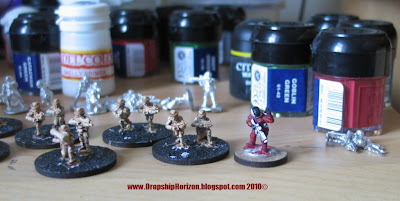 The painted trooper on the right is first of my second fireteam of GZG L-UNSC. Just out of picture are a couple of troopers painted yellow who'll be finished today as well - all in between cooking a Steak & Guiness Pie using Jamie Oliver's recipe. 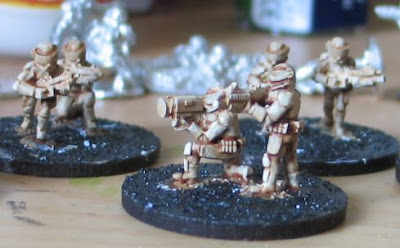 I could easily super-detail these figures but don't want to. I had planned to paint them Vallejo German Orange Ochre but liked how this quick and simple finish turned out. I'll pick out a few details and leave it at that. I still have a squad of GRAW warriors individually based in the original paint scheme Vallejo Dead Flesh/Desert Yellow as modern super troopers for skirmish games and quick Ambush Alley/Force on Force encounters. Of course, this is only the part of my workbench that I'm not embarrassed to show - got out of hand a bit recently - Khurasan Vespulids who are ahem, a bit yellow just now, a GZG AV-7 "FanVan" VTOL Utility Transport, various conversions, Lime Goo, post apocalypse and odds and sods in various states of finish.