It's what we call a shake and bake colony...

.
My WIP GZG shanty town, the fruits of yesterday's labour! It's the early morning shift leaving for work on LV-426b. 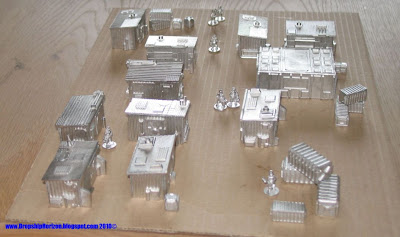 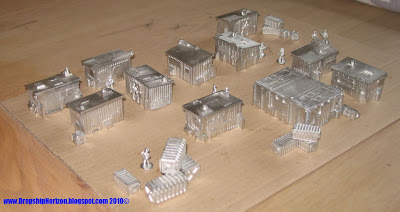 Click on pictures for bigger images
What you see in the pictures are two GZG V15-Col4 Shack Sets, V15-Col1a Colony Bar (basic structure), 1 pack of SG15-ACC20 Large Cargo Containers and 1 pack of SG15-ACC21 Medium Cargo Containers. The figures are mostly GZG SG15-V4 Techs and Crew, plus a two man company security patrol at the end of the street from SG15-V6 Colonial Security (cops). These were freebies as part of Jon's colony shanty/bar launch offer in Feb. In all, excluding figures what you see comes to £63. Money well spent!

Not included as it's mostly painted, mostly, is the V15-Col1b Colony Bar (with extension). I still have to add the awnings and smaller details before I start painting the colony, which won't be till next weekend now as I'm itchy to convert some figures this evening and over the coming week nights. 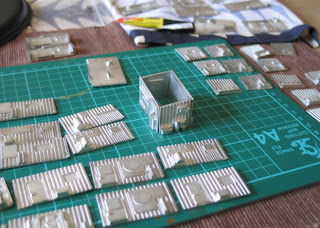 First shack assembled,
Only 2 hours to go....
I am really happy with this little 'colony'. Those of you old enough to have enjoyed Donald Featherstone's Wargamers' Newsletter back in the seventies will remember the annual Old West Gunfight competition - was it in Southampton? Wargamers Newsletter carried excellent write-ups of these, which I fondly remember to this day and you can see the Old West inspiration in how I've set out the colony/post apoc survivor town.

I've got several great ideas for extending the 'colony', but all in good time. I'm looking forward to seeing Mike's shanty creations at The Scene, which should be available in a week or two. Plus, Andrew at Amera Plastic Mouldings will be testing whether he can successfully Vac-form 15mm shanties and more.

I think you'll agree that there's lot's of gaming opportunity ahead!