In The Valley of the Shadow of the Bomb

Jon tells me that the first pack of Khurasan Miniatures 'Human Resistance' will be available in a couple of weeks. Initially the rifles pack whilst the command set will follow a little later. Eagerly looking forward to both these packs as I'm sure they will make great looking armed survivors as well as 15mm Balkan militia proxies.

QRF's forthcoming Modern ANP figures in caps, beards and parkas will also make good survivalist militia or home guard. Something very 'Postman' (1997) about them? No? The poses are nicely subdued without being static or too stiff. 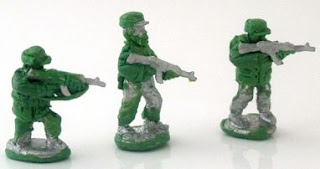 QRF 15mm Modern ANP
(still WIP)
Master Chef gave me some Rebel Minis Fedayeen and I've since been wondering how to work them into my Post-Apocalyptic games - the 'Crowman's' snatch squad perhaps? - Who is the 'Crowman'? Baddie Warlord that I designed whilst on the train this week and am coverting right now. I'll come back to them - in the meantime Mike's Armed Gunmen are a better bet for me! 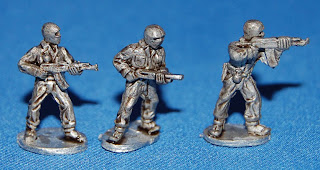 Rebel Minis 15mm
Armed Gunmen
Worth mentioning perhaps that Flashpoint Minis have just released a pack of Iraqi Insurgents - as Shemagh's are a de rigeur post apocalyptic fashion statement! A little conversion or even just a good paintjob, will turn them into more post-apoc Jundies. 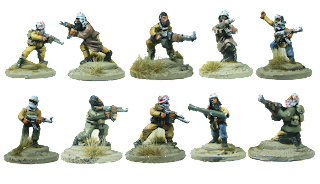 Flashpoint Miniatures FP-ME-IRQ-01 Iraqi Insurgents (Fedayeen) Pack
I try to love Flashpoint, but those crazy leg poses remind me of a young Forrest Gump dancing in his leg braces for Elvis! Having got that off my chest "Why thank you very much!", I do like that 'leader' miniature with raised arm, but is one miniature worth buying a pack for?.....No. Time to look again at Mickey Yarrow's Iraqi Insurgents.

What about Peter Pig?.....Well I'm initially trying to establish a dystopian urban nuclear winter post apoc feel, and I think only 2 of the minis in each of the Arab/PLO Command and Crew packs really come close to achieving that. other minis in the AK47 Range in this instance require a lot of conversion work. To be honest there are more suitable miniatures for post-apoc games out there worthy of that effort.

You may notice there's a bias here towards AK47s. Well "when you absolutely, positively have to shoot every....." you know!