It's All Gone A Bit Apocalyptic!

.
I'm rested and recharged after a few days away from the emotional Ground Zero back at the office. I'm ready to crack on with some gaming projects and get the painting/modelling momentum going again.

To maximise my creative energy I've decided to give March a theme. With work going to hell in a handcart, returning to the office to find everyone in 'Viggo Mortensen mode' nothing could be more apt right now at this time than surviving the Apocalypse! 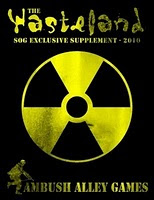 You want a finger to point - blame Shawn's WASTELAND scenario pack for this, as it has helped me visualise how to bring satisfying post-apocalyptic games to the tabletop without going down the hackneyed Mad Max or al mutante atómico route. Except that I really enjoyed Six String Samurai (1998) - Elvis really is KING, in a Mad Max meets The Wizard of Oz, but with swords. And guitars, kind of way.

I have some crazy ideas - some will work, some won't, but they may work for you. You'll see me putting together a new Post-Apocalyptic urban board, which will also get well used for alien invasions and futuristic urban gruntfests.

Plus, if you've been following the blog, you'll know that I've really enjoyed doing headswops. I want to extend my skillbase, and now I have a good stock of GZG's separate heads (SG15-XH1 and XH2) , expect a ream of converted figures over the coming days and weeks. These will all end up in the collective pot as various survivors, 'Jundies', resistance or militia in my future Sci Fi games.

Oh, and there will be a special guest star appearance in 15mm!