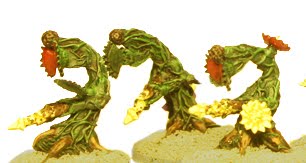 Maybe not quite as sexy as the comic character 'Poison Ivy', but Khurasan's new Vornids are cracking 15mm Sci Fi alien flora miniatures.

Jon kindly sent me a couple of bags of sample Vornids which came today and I instantly took to them. The photo from the Khurasan Miniatures blog (left) gives a basic impression but really doesn't convey how neat these minis are.

Each model comes with a spure of separate leaves, flowers and Venus Flytrap appendages allowing some additional variety but also that the minis are fully 3D and not just cast in two dimensions.

The Vornids have plenty of scope and can be used in an alien planet type setting, as post apocalypse mutations, or an alien invasion following the style of the Day of the Triffids.

They come on a base 2mm deep and overall height averages 20mm (including base) with one Vornid standing fully upright at 25mm, making them formidable opponents for both 15 and 20mm Sci Fi figures. As a swarm they would be a hazard for 28mm Sci Fi as well.

Check out the Khurasan Miniatures blog for more pics. I'll post some myself once I work out how to use the camera on the iPhone.