.
It's a question of character, and Jon at Khuarasn has plenty! Or should that be, his miniatures have plenty. Actually it's probably both. Jon took on board some of my comments in a previous post last year about the need for character in 15mm Sci Fi miniatures, even some of the specific things I felt would create this, and hey presto...... pure class in this new pack of blue collar Spacers from Khurasan Miniatures to crew your favourite "flying piece of go se".

Khurasan Miniatures 15mm Sci Fi
TTC-2501 Small Spaceship Crew $4.99
Brilliant! What else can I say? Now, every Spacer needs a home and whether it's crew quarters or a little des res hab-pod dirtside a few little luxuries make life more comfortable between episodes. 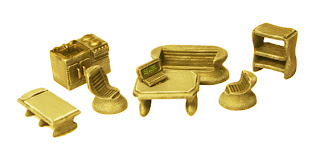 Khurasan Miniatures 15mm Sci Fi
TR-9 Sci Fi Furnishings $5.99
Again, brilliant. A well thought out little set. For decades missing from 15mm Sci Fi skirmishes and RPGs. It's small touches like these and Critical Mass Games recent street furniture that cement 15mm Sci Fi in the gaming psyche as being mainstream. A bold move and one which I hope pays off.