Now that I've read through the Blasters & Bulkheads rulebook, I think I have a good feel for the rules.  Here are two forces I've used for In The Emperor's Name, adapted into B&B teams.

I started with the bad guys (not sure what that says about me), working from my Laserburn Redemptionists.  In the world I'm slowly developing, the main antagonists will be from a demonic or religious cult.  This will be a very large and powerful organization... it will have basic cannon fodder troops (haven't selected these yet), a group of elite warriors (my Redemptionists) which follow one of the paths to power (I'm going with The Path Of The Chosen for now), and yet another group (my Redemptionist Dreadnought) who wield the deadliest ancient artifacts associated with the temple.  One of the warriors on the Path is granted special gifts or trained in special abilities, which I will use Essence Powers to represent.  So, after spending some time in the Character Creation chapter, here's what I came up with: 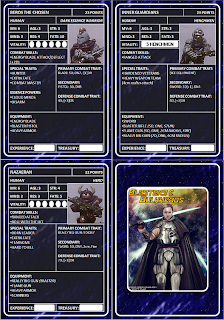 It's obviously been awhile since I've played an RPG... my first attempt had some very underpowered characters compared to the book's sample forces.  I originally went with one or maybe two traits per character, but I beefed them up a bit more.  These printed out to twice the size of ordinary playing cards - 5" x  3.5" - and I actually printed two per page plus two card backs.  Since I would be using these cards for bookkeeping instead of one of the paper rosters, I made some counters for Fate and Vitality. 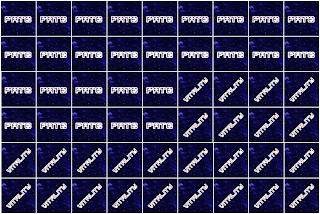 Then it was time for some heroes.  I decided to go with my G.I.Joe Cobra Viper-inspired Rebel Minis Earthforce Troopers, with a Laserburn character and a Critical Mass Merc as an alien companion.  If you're wondering where the "Black Falcons" name came from - take a look at classic Lego Castle sets.  I'm going to base a bit of this still-unnamed universe's background off of some of my childhood Lego adventures. :)  Gann Helray will be a brash young Imperial Baron (or maybe just an heir at this point)... Black Falcon will be part of his family crest. 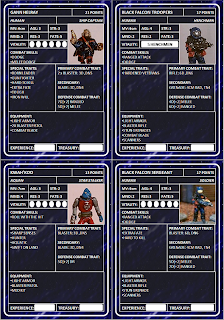 Neither force costs the full 80 points suggested by the book, but I figure I'll do some tweaking or adding after my first few games.  In any case, it's time to see how Blasters & Bulkheads performs on the tabletop.  So watch this space for Blasters & Bulkheads Part Two - Scenario AARs.