This is the second AAR from my Blasters & Bulkheads micro-campaign, pitting adventurer Gann Helray and his Black Falcons against Beros, Chosen of the Shadow Worlds (see the forces I created here).  After the last scenario (full AAR in the previous article), Helray learned that an old flame was attempting to smuggle an artifact out of the spaceport of Zillium.  She is being pursued by Beros, who has been sent by the Shadow World Elders to retrieve the item in question.  The orders didn’t specify anything about keeping the courier alive - but the item must be retrieved intact.

Alina Jax had almost reached her ship when she caught site of Beros The Chosen.  She cursed the alien who paid her to steal this artifact - he had obviously lied to her about its origins and importance.  She’d have to pay him another visit... if she managed to survive the next few minutes.

This scenario takes place just after the last battle.  Helray’s alien companion Kwah’Koo was badly wounded (KO’d) in the last game, and operates at a speed and strength disadvantage for this battle.

This game is the second scenario from the Blasters & Bulkheads rulebook, with just a few minor changes.  In the book, both parties are trying to stop the Courier (basically a moving objective with character stats).  In my storyline Helray wants Alina to escape safely, so his side’s objective is simply to delay Beros’ forces long enough for Alina to escape.  Beros’ objective is to take the artifact from Alina before she can reach the ship.  She can move up to 10cm per turn, so Beros must act quickly to stop her.

Alina is a GZG Civilian Colonist.  A mix of other GZG and Laserburn civilians were scattered around the table.  Scenery is a mix of GZG Shacks, Battleworks Studios Startown Slums, and The Scene Desert Dwellings.  Alina's ship is a Titanium-series Battlestar Galactica Raptor toy (which I need to repaint). 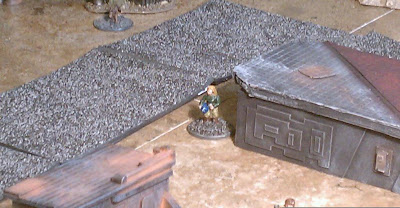 Alina ran toward her ship at the start of the turn.  Helray won initiative and charged to intercept her.  Beros also charged directly forward.  Kwah’koo charged as well, but couldn’t keep up with Helray due to his injury.  Nazaeran advanced and had a clear line of sight to Helray.  He fired his Sun Gun at the young nobleman - Helray lost two Vitality.  Sarge and the Black Falcon Troopers couldn’t activate until the end of the turn (see last AAR), so the activation passed to Beros’ Guardian henchmen.  Beros ordered them to set their rifles to Stun and fire on Alina.  They weren’t successful due to the range.

Sarge caught up with Kwah’koo and took a potshot at Beros.  It was unlikely to succeed at this range, but Sarge likes saying a proper “hello” to old friends.  Surprisingly, he was able to knock a couple Vitality off the dark warrior.  Sarge ordered his troopers around a nearby shack, hoping to gain to a better firing position.


The spaceport civilians were now fleeing into their buildings.  Alina managed to find temporary shelter behind a rusted shack, still inching closer to her ship.  Helray won initiative again and caught up with Alina.
Kwah’koo moved to a cover position with the Falcon Troopers.  Beros ran to intercept Alina and Helray, while Nazaeran advanced and fired on Sarge.  Sarge was hit for three Vitality.  Beros’ Guardians charged towards Alina’s shuttle.

Sarge aimed and shot at Nazaeran, but his rifle was no match for the Enforcer’s heavy armor.  The Falcon troopers took a firing position behind a pile of containers... all they could do was wait for targets.

Helray escorted Alina to her shuttle.  They almost made it when Beros caught up with them.  He struck, draining two Vitality from each.
Kwah’koo scurried to assist, but ended up in Nazaeran’s sights once again.  Kwah’koo had some miserable rolls for the attack - he lost six Vitality to the Sun Gun’s blast.  He was KO’d for the second straight battle.
Beros’ Guardians attacked Sarge.  The dice finally went against Beros’ forces - the Guardians only rolled a single success on their attack.  Sarge happily returned fire, dropping three of the Guardians.
His troops abandoned their cover and raced to the aid of Kwah’koo.  They broke out his Med Kit, but were unable to revive him.

Alina was unable to break away, and Helray couldn’t harm Beros.  Beros used his “disarm” Essence Power to grab the artifact from Alina.  He left the melee.  Once he was clear, Nazaeran slipped around the corner and fired his flamethrower at Helray and Alina.  They were both KO’d while still on fire... not an impressive end to their mission.
Sarge managed to shoot down the last two of Beros’ henchmen.  The Falcon Trooper who attempted to help Kwah’koo carried him back to the table edge.  Two Falcon troopers laid covering fire towards Nazaeran while the other two ran to extinguish Helray and Alina.

Sarge took a potshot at Beros, then assessed the situation.  The boy, the girl, and the blue thing were all down, possibly dying.  Sarge himself had also been wounded in the firefight.  He ordered his troops to grab the wounded and fall back... if they didn’t receive medical attention soon, the baron would probably execute Sarge for allowing his son to die fighting a Chosen Warrior.

Beros and Nazaeran had no problem reaching their ship.  The elders would be unhappy that Beros’ Guardians had been killed, but he had accomplished his mission.  He had also dealt a blow to that Helray boy... a lesson he wouldn’t soon forget.  Nazaeran set course for the Shadow Worlds, and Zillium quickly became a speck behind them.

Yes... that Helray boy was proving to be quite troublesome...

That's all for my little Blasters & Bulkheads field test.  A detailed review of the rulebook will follow shortly... in the meantime, pleas send flowers to Helray and Alina in the burn unit.