Invaders from the Gate - a Gut Check AAR

I've been doing quite a bit of painting and modeling lately, so I decided it was time for a few games!  With the help of some very good suggestions on TMP (see this thread), I had a pretty good idea of what I wanted to play.  And since SpaceJacker announced he is updating his Gut Check! game, I figured this would be my last time playing v1.7 of those rules. 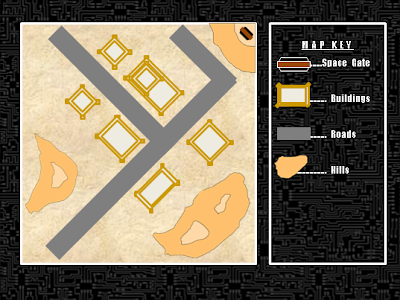 The table I set was pretty dense - pretty much an urban battle.  Six desert dwellings from The Scene, a Space Gate from Shapeways, and some homemade hills and roads.  One of the scenarios that was suggested to me was to have some invaders using or reclaiming their Space Gate after its discovery.  Then a third party would come in, unannounced, to take control of the situation.  So I put together some player forces, and stats for Invaders that would be controlled by the game mechanics. 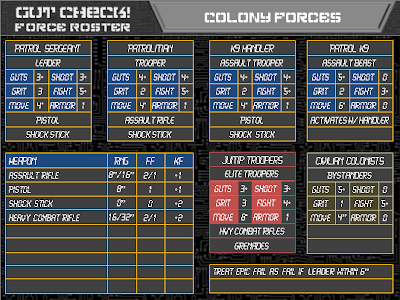 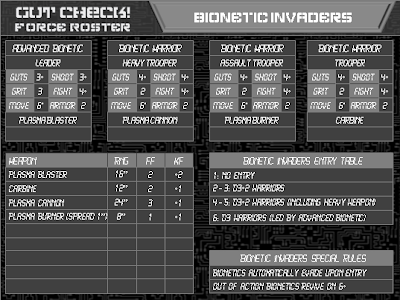 Scenario Rules.  An ancient and unknown alien device was discovered on Copper Moon while searching for a new mining site.  Some buildings were quickly built, and research began on the new device.  At the start of the game, the table is occupied by a handful of civilians (the archaeology/science team and a press crew), supported by a planetary security patrol.  The lead scientist is being interviewed for a late-evening Stellarcast when the artifact suddenly activates. 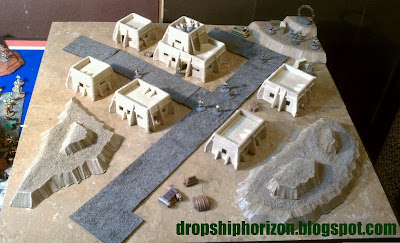 At the start of each turn, I would roll a D6 to see how many/what kind of Invaders enter the table.  This is a variation on SpaceJacker's blip mechanics from the Gut Check! core rules.  The Invaders would immediately take an Evade action, or Charge if another model is within 4" of the Space Gate.  I used the Solo Activation counters to manage the Invaders once they were on the table, activating them two at a time just to keep the game moving.  The Invaders would target civilians first, unless another model within 4" shot or charged at them.  The Security Patrol's first priority would be to get the civilians into cover - preferably the buildings.  Their second priority would be to engage the Invaders. 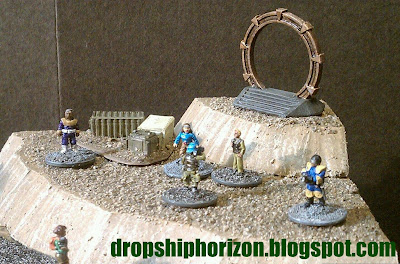 At the end of each turn, I would roll to see if the "reinforcements" arrive.  They are a group of elite jump troopers that are completely unfamiliar to the civilians or security patrol, but would certainly be welcome when they arrived.

The Game.  It was a very fast and furious skirmish.  The first group of Invaders through the gate killed the reporter, videographer, and their assigned patrolman.  The female scientist managed to last a couple of turns in assault, and the other scientist ran away as fast as his legs could carry him. 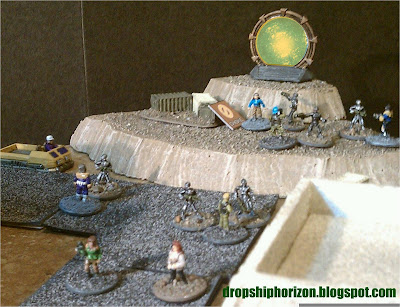 The K9 team and other patrolman on the streets quickly moved the other civilians into the buildings.  The patrol sergeant and his best rifleman were already atop the large building when the scenario began - an ideal firing position if used correctly.  But the sergeant managed to roll 1 on the first two turns.  I guess that meant he wasn't the best choice for that assignment!

The second invader team through the gate brought along a heavy weapon.  They made short work of the remaining civilians near the Space Gate.

Once most of the civilians were indoors (all but one - I couldn't get a patrolman over to him and he kept rolling 1s on his own!), the patrol sergeant finally passed an activation.  He ran downstairs and joined his K9 team - I figured this would be the best assault unit I could put together.  The other two surviving patrolmen were now on top of buildings, providing covering fire for the assault unit.  Unfortunately, this left the back door of the large building open to an Invader team.  Another civilian was being targeted. 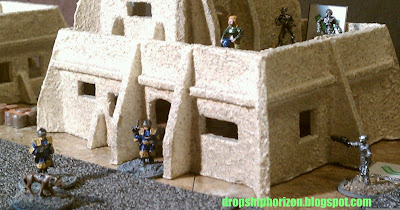 The fighting was quick and brutal.  The shock sticks helped the Patrolmen, but the were completely outgunned.  Another team of Invaders had just passed through the gate when some unexpected reinforcements arrived on the opposite corner of the table.  The Drop Troopers had arrived!

Most of the civilians had been killed by now, so the Invaders now turned their weapons on the new arrivals. But it was no use.  Despite outnumbering and outgunning the Jump Troopers, the Invaders simply couldn't keep up with their speed. 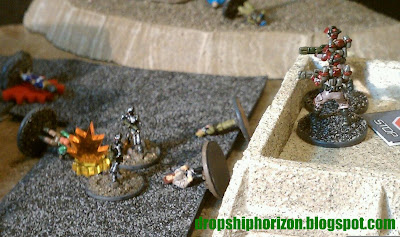 Quickly, the battle turned from a human slaughter to a mess of shattered bionetic body parts.  The Jump Troopers hopped from rooftop to rooftop, disabling teams of Invaders while moving towards the Space Gate.  The remains of the security patrol were able to finish off the Bots - it's amazing how much of a difference a single Shock counter made in those assaults.  In the sixth turn, the Invaders back was broken by rolling a 1 on the arrival table - no further bionetic reinforcements.

The path was now cleared for the Jump Troopers.  To represent their experience with the Space Gate technology, any Jump Trooper in base contact with the Gate could shut it down by passing a Gut Check.  One trooper finally reached the gate - and rolled a 6 at the end of that turn. 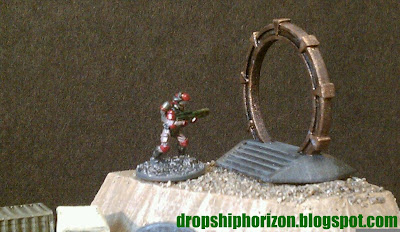 The gate was shut down.  Two turns later and the last of the Invaders was destroyed.  But the price paid had been terrible... five dead civilian scientists, three dead journalists, two dead security patrolmen, and a wounded dog.  The jump troopers had been more fortunate - only three had taken any shock counters the entire game, and most removed them at the end of their turns.  No jump troopers were killed.

The entire team of Jump Troopers then surrounded the gate, set charges, and destroyed it.  They left the scene just as they had arrived - without saying a word to any of the other humans in the settlement.

This was a great little scenario.  Big thanks to Goober and everyone else over at TMP for the ideas!  There could have been a secondary plot once the Invaders were destroyed - the security forces trying to stop the mystery Drop Troopers from destroying the artifact.  In a multiplayer game, I think this would have been a fun twist.


I'm also looking forward to seeing how the next version of Gut Check develops - the beta version SpaceJacker sent me this week has some great mechanics.  Keep an eye on Tiny Solitary Soldiers to see its progress.