.
Meanwhile, Critical Mass Games continue to pile on the 15mm goodies! The Tamaska/Fenrir Heavy Walker will be released at Salute on 24th April. The kit allows you to build either variant. 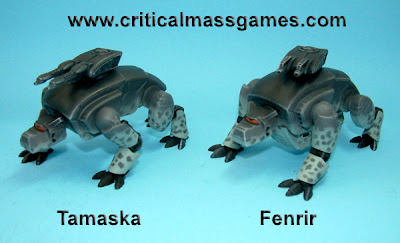 Critical Mass Games 15mm Sci Fi
Protolene "Tamaska/Fenrir" Heavy Carrier
- 1 Variant (PRVH7a - £20.00)
Inspired! That camo scheme reminds me of an ME262 and shows off the models to their best. I'd beeen looking at a similar camo scheme for some Grav Tanks only this week - but Craig has really captured it well. Make sure you check the Critical Mass forum for more closeup pics.