I Will Survive! Zombie Hunters / Survivalists from The Scene

Yesterday brought added impetus to push on with my post apocalyptic terrain / wasteland after stopping by the village post office to pick up my order from The Scene UK.

I have to admit to acting like an excited schoolboy opening the packet before I got home to examine the goodies inside - the new 15mm Zombie Hunters / Survivalists, a complete range of figures from The Authorities series plus some new terrain accessories.

Best of the bunch and by far one of the best individual 15mm miniatures on the market is ZHoo2 Zombie Hunter/Survivalist. 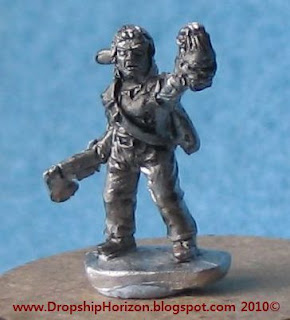 The Scene UK 15mm Sci Fi
ZH002 Zombie Hunter / Survivalist: 40p
This guy oozes Mad Max post apocalyptic character. Armed with an axe and a cut-down shotgun strapped to his back, he holds aloft a severed head that could easily be a Green Martian, Space greeblie or Zombie.

I bought two of these models for myself - the second to become a Victorian Sci Fi Flashman style hero in shell jacket or pelisse. The figure has a lot of potential for conversion and Mike would do well to look at a couple of variants based on this figure.

ZH002 is easily going to become my personal survivalist miniatiure in RPGs and character based dystopian future / survival games. 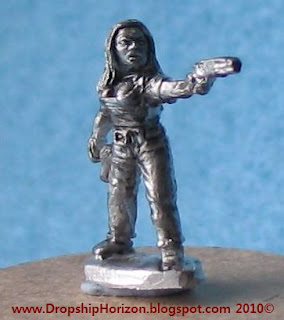 The Scene UK 15mm Sci Fi
ZH001 Zombie Hunter / Survivalist: 40p
ZH001 is a statuesque beauty standing firing an automatic. The face would quite easily make her a good Buffy proxy (especially if she had the axe and severed head - not too hard a conversion) or my own favorite post apocalyptic heroine, Ali Later from Resident Evil: Extinction. 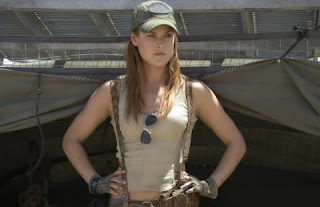 Ali Later: Nuff Said...
None of these miniatures disappoint. They are all characters in their own right and rightly deserve a place in your post apocalyptic / Mutant / Zombie / Modern / Sci Fi skirmish games. I purchased a couple of each to both give different paint jobs and explore conversion potential. I am so impressed I will get few more and have ordered a set of each for my closest gaming pals Maff and Eli.

Am looking forward to seeing how this range develops and strongly urge you support Mike's efforts through not only buying the minis but suggesting figures that will add value and character to the range as it progresses.