.
April has well and truly sprung, so it's time to look at the weeks ahead. The apocalypse project continues. I've struck a wall with the bleak urban theme, so have switched focus to a shattered Mid-West/Nevada setting - which I'm calling '300,000 Zombies to Graceland'.

Towards the end of last month I placed a decent order with Mike at The Scene for both Urban Warriors and Zombie Hunters. These are destined to become generic post apocalypse survivors. Looking forward to these arriving. In the coming week or so I'll order a horde of 'Infected' from Piotr and top them up with Mike's 'Ragers'.

I was quite lean with my spending last month, in part deliberately as I knew there would be some new releases pre-SALUTE. I dipped into the underspend to pick up Rebel Minis new Modern US Infantry packs. These are not only for Force on Force/Ambush Alley games but to double-up as a Lower Mid-tech battleforce for Tom.War. 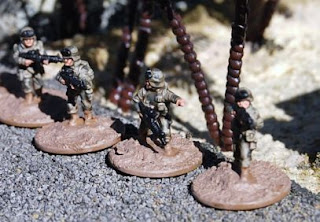 Rebel Minis 15mm Modern US Infantry
(great photo from the Rebel website)
One pack of RMUSI1 Infantry and RMUSI2 Command plus an RMUSI3 Sniper pack dropped through the letterbox on Thursday morning morning whilst I was at work, alongside a copy of Operation Flashpoint: Dragon Rising from Amazon.com. The Modern US look just like the illustration on the cover of the XBox game - almost as if they were meant to compliment each other! Needless to say plans to paint minis on Thursday evening collapsed whilst I 'played' with the new figures, Operation Flashpoint and then back to the miniatures again.

In the most part the Modern US troops are well detailed, nicely sculpted minis, but I feel a little frustrated that the combined Infantry and Command Packs leave me just 1 SAW figure short for a full dismounted Stryker Platoon according to FME3_21.

As I want some Rebel Minis 'Ragers', I'll buy another pack of RMUSI1 anyway, to do yet more head conversions (modern mercs/post apoc. survivors/renegades etc), whilst the excess Javelins, M240s, plus a spare sniper team given over towards Master Chef's 'Ghost Recon' forces.

QRF's Strykers are really nice models with a slightly Near Future look that can be enhanced with a well chosen camo scheme. I have four models and recommend them (change the .50 cals for FOW ones though!) - however, I'm planning that transport for these Rebel figures will come in the form of Khurasan's Cafferata APCs - hoping that the actual 15mm model looks as cool as the digital render I previewed a few weeks ago! 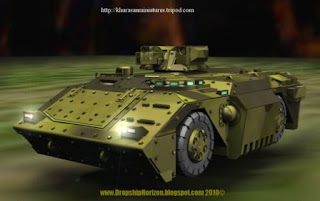 In addition, I'm considering either a 'snatch squad' of the Modern US figs or an 'assault squad' of Critical Mass Games' power armoured 'Blockhead' Mercs riding in GZG's new A7-V 'FanVan' VTOL.

To further take these Rebel 'Mid-tekkies' into the future with Tom.War, I'll be giving them force multipliers with a range of dedicated GZG MAWPS and UAVs plus a squad of GZG 'Cyclops' Battlesuits for those occasions where you absolutely, positively need some bad ass firepower! 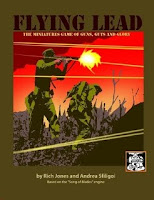 During the month I'll also put together the elements needed to play actions inspired by 'Ghost Recon' using Flying Lead as part of a Traveller:Broadsword inspired game setting. This includes GZG's L-UNSC as Zhodani. Plenty of L-UNSC!

So, that's what's rattling round in my mind just now. Not hard and fast by any means and plenty of room to allow other gaming project streams to keep moving forward.