.
Tonight, an exclusive colour render of the Cafferata APC. A 15mm Sci Fi AFV available from Jon at Khurasan Miniatures in about a month's time. 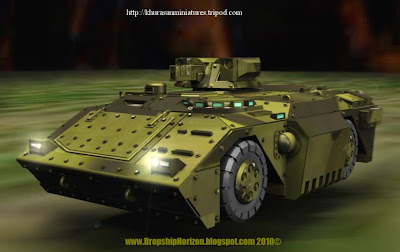 Khurasan Miniatures 15mm Sci Fi
Cafferata APC
The image is a full render of the completed rapid prototyping design. So it will look precisely like the colour image right down to the smallest details in the illustration above.

BACKGROUND
"The Cafferata is the main APC used by the Federal Marines. The Marines call them "camels" or, more often, simply "trucks." It's a conventional/anti-grav hybrid, with retractable wheels. (It's illustrated here in low hover, the wheels retracted.) As an anti-grav fuel-saving measure, the wheels can be deployed, in road mode, and the vehicle's anti-grav engines make electricity to turn them, rather than hovering the vehicle, as road mode requires far less fuel. It can achieve quite respectable speeds of 70-80 kph in road mode, under ideal ground circumstances. The vehicle can also operate as a normal anti-grav craft, of course.

Its sensor suites is very sensitive to sudden changes in altitude, and the vehicle's anti-grav engines kick on automatically if, for instance, the ground or ice give way, a bridge collapses, etc. (Of course the vehicles can just cross rivers by hovering over as well.) If a tire is shot out, the antigrav engines on that flank deploy automatically to keep the vehicle level, or it can
just switch to anti-grav mode.

Marine vehicles used anti-grav mode almost exclusively in the Sepulvedan War, as Sepulveda is one of the galaxy's leading supplies of angravium!

This vehicle has quite a punch with its heavy autocannon and two missile boxes, but its primary purpose is to transport the marines into battle. The L-HAC is the main battle vehicle of the Federation.

The mode is almost exactly 75mm (3") long. It is designed to transport a squad of ten marines, plus crew. It comes with a flight base, four wheels, a hull and a turret. The turret has a heavy autocannon and two missile boxes. The wheels can be attached in anti-grav mode or road mode.

The vehicle is named after a Terran Marine hero from a pre-Federal Terran war of the C20th , the "Korean War." (Click here)."


I really like the look of this APC. Chatting with Jon it appears that elements of the Bradley were used within the design. I think the Cafferata is an incredibly versatile and workmanlike model that will easily look comfortable on both hospitable and inhospitable worlds complimenting a wide range of manufacturer's figures on the market.