.
'Pea Dot' camo schemes I knocked up freehand using Paint.Net during some 'downtime'. 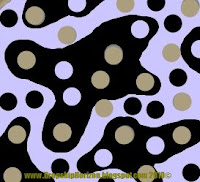 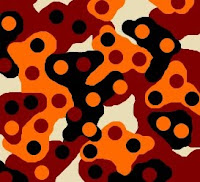 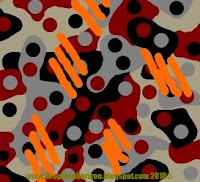 One of my favourites but the orange stripes will need to be broad on a 15mm figure and are likely to only suit GZG or similarly robust miniatures. 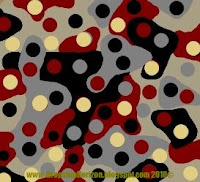 The lighter dots really make the Urban Brick Ambush camo scheme jump out in 15mm! Replace the GW Bleached Bone dots with a darker buff or a light grey if you want to mute the effect.

If you reduce the camo schemes within an image editor, you'll notice that the colours start to merge as you make it smaller. This happens in reality when the naked eye views camo over distance. Good ol' British Army DPM camouflage (green, tan, brown, black), would appear as green/tan/ black at 50 metres, green/black at 100 metres and just plain green at 200 metres.

With the exception of the Midnight Bubblegum camo I've used 4 pattern colours on all the schemes. This is largely unnecessary on 15mm figures, you can see in the Urban Brick Ambush example above, the GW Kommando Khaki and mid grey merge into one.

The four volour scheme will stand out more distinctly where there is a larger surface area such as on PA, Walkers/Mechs and armour.