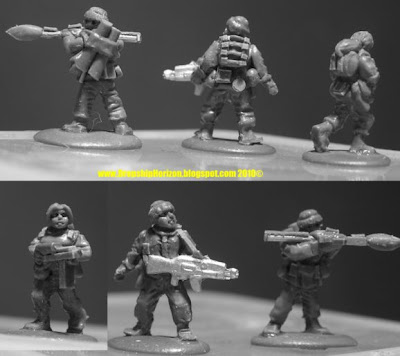 Lovely looking minis 'Zar ne?' Can't wait get hold of these for Ambush Alley, Force on Force, Tom.War and even AK47 Republic as Balkan and Chechnyan militia. I can already hear Master Chef muttering "Sword Worlders!"

The Medic carries a heavy load of medical kit and is armed with an SMG for when you "Absolutely, positively, have to take out every Transhuman in the room".

Jon advises me that they will not be available to purchase immediately due to his casting cycle. Never mind, definitely one to look forward to!

The range will consist of: