3 Mafiosi, 1 Bond and a Wedding 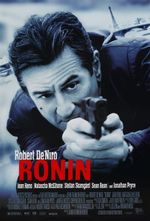 Bond is not to be taken too seriously and is a prime example of the Principals of Evil (Stormtrooper) Marksmanship! At least Bond himself bleeds these days.

Joe's house rules for playing 'Bond' using Force on Force have been posted in the sidebar to the right. Hope you enjoy them.

RONIN is one of our favourite movies in the Dropship household. De Niro is a tour de force, the dialogue is razor sharp, ambush scene brutal and car chases, just flat out amazing. Just what is needed if we're to aspire to a  'realistic' Force on Force based 'shootout' game.


The sort of professional work depicted in RONIN will always be required - in many ways the 'crew' brought together in the movie reflects the nature os some of the more dirtside based parties of disparate characters in my classic Traveller campaigns.

I've not been able to get to my figures today as planned. Due in part to my father-in-law needing a hand with a community project in the local woods, then Heather was dug-in, in full tears and tiaras mode watching THE wedding. She loves a good frock or two on the red carpet - weddings, Oscars, you name it. So I put any political misgivings aside for the day and enjoyed being part of something bigger and more enduring than all the crap going on in the country right now.

Master Chef had more luck. Tony at East Riding Miniatures had done a fast turn around on a Platoon 20 order enabling him to bash up 3 Russian Mafia – 2 guys in suits, 1 with M16 and greenstuff flak jacket and another with SMG (cut down M16) and pullover with nasty gold necklace over it – in both cases the suit jacket was painted as a leather jacket. On my advice, the guy in a bomber and jeans with pistol in 2H grip was painted in a very nasty red tracksuit, trimmed in white with green trainers (Adidas stripe of course). With Mrs Master Chef equally entrenched in the wedding spectacle, Maff even managed to paint a "ruddy bow tie" on the Platoon 20 'Bond' figure. Well done mate!