Watched QUANTUM of SOLACE this afternoon. Purely for game research purposes of course.

The car chase at the beginning is brutal and out does RONIN, which nevertheless remains one of my favourite movies. Early on Quantum feels like a Bourne but loses it from the opera scene onwards from which point it starts to fade into more typical Bond fare. However, Bond sidekick Olga Kurylenko is stunning and makes up for the poor end run to the final credits.

So, I was musing about Bond in 1/35th scale earlier - Russian Mafia and Balkan Para Militarie as adversaries. So what if we want to recreate Bond in 15mm? Go to The Scene. Using The Authorities range of minis, take the head from SA001 (kneeling figure on left) and put on the body of SA002 (figure on right). 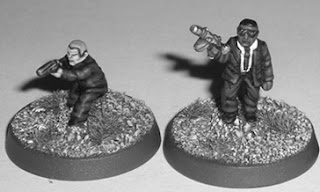 The Scene: 15mm Authorities Range
That should give you Bond, as per the Quantum of Solace promo poster. We'll pretend it's an MP5. Alternatively, if like me you would like your Bond firing his pistol in both hands from a standing position - a slightly more time onsuming torso swop would need to take place.