MASS EFFECT from BioWare is an action based role-playing game for the Xbox. It's a cracking game and essentially Traveller for the C21st. Being a digital product it not only allows you to build the background and principal traits and skills of your player character in the very best RPG traditions, but also let's you customise their physical appearance within the game.

Now, when I began MASS EFFECT 2, Heather told me that if I was going to give up 40 hours of my life on a Sci Fi adventure, I might as well spend it looking at someone pretty! 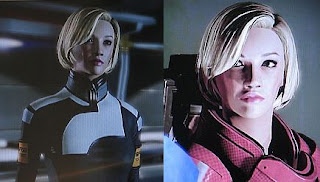 Not one to argue with such sage advice, here we have Commander 'Cameron' Shepherd, based on a blonde Cameron Diaz. which I thought would be a good contrast to the major in-game's brunette squad member Miranda Lawson.

A practical use of the tool in 15mm tabletop Sci Fi, is to create the individual physical appearance of characters for your game - particularly thing like squad rosters, in order to breath more identity and life into your figures.