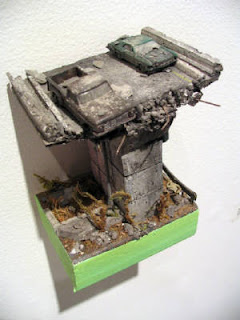 Watching Book of Eli again, I'm struck by the post apocalyptic imagery. Two great little documemtaries accompany the DVD and are also worth giving your time to.The second takes you through the concept and realisation of the world the principal character travels through.

One of the things that struck me was the number of small post apocalpyse game vignettes that could be created based around only a few key terrain features.


It's worth checking out Jason's work. I like the gritty, abandoned feel he creates. Too often apocalypse model scenery is too pretty and conceived or too drab. These just strike the right balance. The smaller vignettes (rather than the cityscape tableau) are very doable by the average gamer. They can be used individually or could be combined into larger tabletop setpieces.

That destroyed elevated section of highway is crying out to be made commercially for wargamers. It could be modularised so that four lanes could be created if the gamer wished. An inclined support could extend the model and  a curved section too. A couple of curved sections would provide aditional versatility as on ramps, around whihc a whole battlefield can be built. Though to be honest, I wouldn't expect the average Modern or Sci Fi gamer to buy more than two or  at a push maybe three sections.

Right, I'm off to have a stab at making one of these for myself!