.
You can blame Matt at Wartime Miniatures (and I guess Channel 4's post apocalypse shorts with Paddy Considine). Matt's 20mm Contractors in baseball caps (SF01) speak to me of Post Apocalypse shennanigans out Eli's way in a Post Comet America. 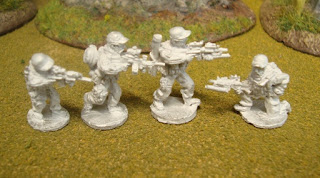 Wartimes Miniatures 20mm SF01
Special Forces/Contractors
I say Post Comet - it can be 'Post' anything. A Twilight 2013 world where groups of survivors battle for resources, control and just survival. I'm spurred on by the Pound Shop in Aberdeen which has near as damn it 1/72 Humvees and a range of civilian vehicles including articulated lorries for - you guessed it, £1.

The setting means that I can also mix and match packs of the best looking miniatures on the market without having to worry about TOEs or having the correctload out of weapons and equipment.

Elhiem Figures 20mm SF3
Special Forces Team Advancing at Ready
Stepping back from the Post Apocalypse scenario. For gamers on a budget or who simply maximise bang for the buck - these miniatures provide it. So let's look at some of the options:

Chatting with MC this week about the potential for playing a mini campaign inspired in part by the world created in the Kevin Costner vehicle THE POSTMAN. Maff has more of a RED DAWN leaning but there's room for both (and more). Mix and match everything we like or can pick up cheaply, including some Cold War and ex-WW2 kit thrown into service. 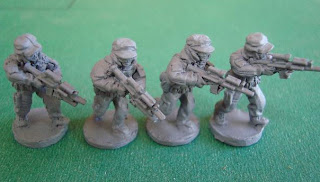 It's these Wartime Miniatures Modern Australians in caps (MA05) above that make me think more of a survivalist army with a unique character as per THE POSTMAN. An idea propagated within Ambush Alley Games post apocalypse campaign pack that was part of the Special Operators Group subscription a year or so back.

You only need a couple of packs to begin and can steadily build or even combine with other gamers to make bigger forces as required without needing to saddle the hackneyed Mad Max/Road Wars one trick pony. 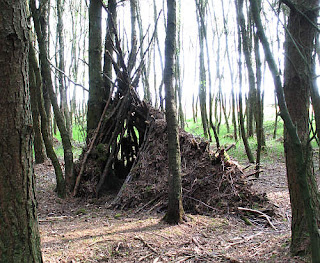 This takes us away from the Last Centurion concept set in Afghanistan/Iraq, which whilst still a good idea, is a conflict arena that has less potential for us as we don't game Afghanistan. Plus, when you come across the remains of shelters like this one above in the local woods it colours your direction of thinking.

20mm is all well and good, but what about 15mm? Rebel Minis have several very good packs, there's Khurasan's Resistance Fighters and The Scene's US Special Forces, who have bag of character. Plus Modern US soldiers are available from various manufacturers.

Plenty in both scales to run with this idea.