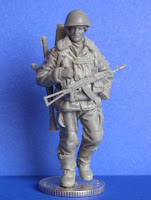 15mm Sci Fi has largely lost out this month to 20mm Modern Russians. I'll be psoting on Crisis in Alcovia later in the week, but I'm having a hell of a time getting the "Flora" pattern right in 20mm.

I've even been thinking of doing Alcovia  in 1/35th. For skirmish gaming purposes there's a nice range of 1/35th available from Zveda, Dragon, Alanger and now Tamiya (ex-ICM) plus some cracking resin models from a range of manufacturers as the figure illustrated (left). Whilst not in the sort of combat pose I usually demand of my wargame models, he's the epitome of a post Cold War modern Russian soldier. A great character figure to have on the table.

Dragon also sells a weapon set of the AK47 family, allowing me to convert more easily to obtain 1/35th WW2 figures, particularly the figures in camo suits such as these Black Sea Commandos.

Now I admit all of this may remain a pipe dream. But who knows. The new Osprey edition of Force on Force from Ambush Alley Games has really encouraged me to think outside the box.

So, why don't I just wait for the newly announced 15mm Modern Russians that appearto be coming out? Two reasons, first, I've campaigned too long to see 'Ultra' Modern Russians in 15mm and now simply don't care.  Second, I've built my expectations up before of what the miniatures will look like (and I'm talking WW2, Sci Fi  etc here as well) and had my hopes crashed and burned too many times by what turn out more like these link instead of these link.

What about 28's? Well, if Im going 28mm I might as well go 1/35th. I need less of everything in the larger scale (figures, vehicles, terrain),  there's more AFVs and vehicles available on the market in 1/35th, painting requirements are about the same, greater conversion potential , plus due to the size (& cost) it's self regulating with less chance of scope creep.

Now, if anyone knows of a suitable 1/35th James Bond figure?

So 15mm Sci Fi, which is why you are here after all...... plans for May inclue more separate heads from GZG, placing an order with Blue Moon via Old Glory UK, keeping some cash back for some new goodies from Khurasan, plus more High Tech Humans in Power Armour.