.
I'm delighted to present some really awesome new sculpts to appear shortly from the metalworkz caverns of Khurasan Miniatures. 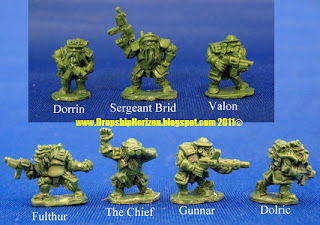 
The Thrainites are short stocky warriors who come to fight for the Molch in the Molch Vornid War, the hard core of the volunteer forces called the Interplanetary Brigades. Pragmatic soldiers with a serious attitude toward war, the Thrainites are transported in Cane Toad APCs and have medium armour support from Goanna and Taipan Tanks.  They prefer infantry fighting at close quarters with submachine guns to make quite sure the enemy is dead,  getting valuable back-up from the occasional light machine gun.  Though short (coming up to the neck of a human, roughly), the Thrainites are exceptionally tough and stubborn.  They wear partial carapace armour.

These are the first seven sculpts including a light machinegun, making up the basic infantry force.

Now as it happens I'm not a fan of Space Dwarves per se, even though Denizen's Dwarves remain my favourite Fantasy force and Argy the (Ral Partha) Dwarf saw me through many a dungeon adventure back in the early 80's. But these new Thrainites from Jon at Khurasan have won me over big time! They have that essential ZZ Top appearance and simply look stunning! This is the level of sculpting in 15mm we should be expecting in 2011.

I think these guys are going to be a joy to paint and fun to put on the tabletop.