I suffered a collapse at work yesterday and was taken to A&E by ambulance. Glad to report that I'm fine and was released later in the day. Heart, blood pressure etc, OK, but I'm still feeling a little out of sorts.

The care I received from the paramedics, nurses and doctores was first class, and I can't praise enough the colleagues at work who came to my aid when I suddenly went down and looked after me until the paramedics arrived.


I can't say I was worried or scared at anytime, or that it has been a 'shock'. On the contrary I was overcome by a sense of deep calm and serenity. I seemed to feel distanced as if viewing everything from down a long corridor.

This 'event' has provided me with a good heads up on both where I am with my hobby and where I want to be going forward. Nothing profound. I feel a need just now to lift my boots from the streets and alleyways of New Grozny or whatever you want to call it. Put aside my companies of 15mm Grav armour and with my new WTFN (Why The Fuck Not) Engine, reach for everything that is fantastical and awe inspiring about space, time and continuum. Reliving through the medium of tabletop miniatures the Sci Fi books I loved so much as an early teen such as EE Doc Smith's Galactic Patrol with but a twist of Mass Effect thrown in. 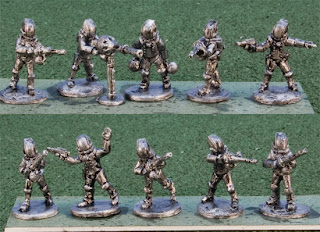 Work is going to be stressful over the next two months as I bring the various high profile project streams to reality. So let's concentrate on 15mm retro Sci Fi adventures from the starlogs of the Galactic Patrol, the rap sheets of Precinct 13 in downtown Mudd Eisley or pulled from the sub-ether waves of the Bermondsy Cluster.

Will be resting up for a few days before getting back fully in the saddle.